Rebels pressed the "Battle of the airports" in north Syria, striking three key facilities, as the main opposition bloc on Sunday accused Lebanon's Hezbollah of fighting alongside its regime allies in Damascus. 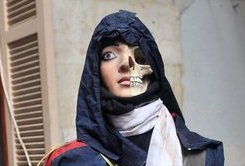 A Syrian opposition fighter reloads a grenade launcher in the Jabilleh neighbourhood in the eastern city of Deiz Ezzor, during clashes with regime forces on February 16, 2013. Rebels pressed the "Battle of the airports" in north Syria, striking three key facilities, as the main opposition bloc on Sunday accused Lebanon's Hezbollah of fighting alongside its regime allies in Damascus.

Peace envoy Lakhdar Brahimi urged backing for an opposition offer of talks with President Bashar al-Assad's regime after the UN rights chief called for international action against the Syrian leader.

In Aleppo, fierce clashes raged between Syrian troops and several rebel battalions, with insurgents seizing an army checkpoint near Nayrab military airbase, according to the Syrian Observatory for Human Rights.

Nayrab is adjacent to Aleppo international airport, a key target for the rebels who have also been battling troops guarding Kwiyres military airbase east of the city and Menegh airbase to the north.

Hezbollah fighters crossed into Homs province of central Syria on Saturday and attacked "three Syrian villages in the Qusayr region near the Lebanese border," the SNC said.

The operation resulted in "civilian casualties and the exodus of hundreds of people," and it has also "stoked sectarian tensions" in the area, the opposition said.

The SNC said Hezbollah was using heavy weapons "under the auspices of the Syrian regime army," adding that Beirut was responsible for ending this "aggression."

In Lebanon, a Hezbollah official said three Lebanese Shiites were killed in clashes in Syria while acting in "self-defence", without specifying if they were Hezbollah members.

Lebanon's Hezbollah is Shiite, while most of Syria's population and the rebels battling Assad's regime are Sunni. The ruling clan and many of its most fervent supporters belong to the minority Alawite sect, an offshoot of Shiite Islam.

Lebanon is sharply divided over the uprising in its larger neighbour, with Hezbollah and its allies in the ruling coalition backing Assad's regime and the Sunni-led March 14 opposition movement and its allies supporting the rebellion.

The Observatory said the three slain Lebanese were members of pro-regime militias who had been trained by Hezbollah, and it reported that at least 87 people were killed across Syria on Sunday, including 35 rebels.

It said the rebels lost five men in the eastern province of Deir Ezzor before taking control of the Kibar checkpoint, seizing weapons and ammunition and killing at least four soldiers.

UN rights chief Navi Pillay urged that some sort of international action be taken against Assad "immediately" and for the president to be investigated for "crimes against humanity and war crimes."

"If there is doubt or hesitation it is because people are assessing the value of military intervention in places like Libya, Syria and Afghanistan," Pillay told Britain's Channel 4 television.

The Syrian conflict, which began in March 2011 with unprecedented mass protests and morphed into an armed insurgency, has left nearly 70,000 people dead, according to the United Nations.

UN-Arab League peace envoy Brahimi on Sunday said the world community should back a Syrian opposition offer to begin talks with the regime and proposed that they be held in UN offices.

Brahimi said opposition leader Ahmed Moaz al-Khatib's offer to negotiate with some regime figures "opened the door and challenged the Syrian regime to confirm what it constantly says about being prepared to hold dialogue."

US Secretary of State John Kerry on Sunday held talks on the telephone with Russian Foreign Minister Sergei Lavrov on Syria, the State Department said.

State Department spokeswoman Victoria Nuland said they discussed the importance of using their respective influence "in support of a viable transition process."