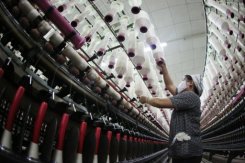 A woman is pictured working in a textile factory in Jiujiang, China's Jiangxi province, on January 16, 2013. China's manufacturing growth hit a four-month low in February but remained positive, HSBC said Monday, noting that the country's economy was still recovering slowly.

The bank's preliminary purchasing managers' index (PMI) stood at 50.4 for the month, down from a final 52.3 in January, it said in a statement. The figure was seasonally adjusted to take account of the Lunar New Year holiday that fell in the middle of the month.

A reading above 50 indicates expansion and it was the fourth consecutive month of growth, after 12 months of contraction.

"The Chinese economy is still on track for a gradual recovery," Qu Hongbin, a Hong Kong-based economist with HSBC, said in the statement, downplaying the fall in PMI.

"The underlying strength of Chinese growth recovery remains intact, as indicated by the still expanding employment and the recent pick-up of credit growth," he added.

The domestic economy expanded 7.8 percent last year, its slowest pace in 13 years, in the face of weakness at home and in key overseas markets.

Policymakers cut interest rates twice in 2012 and have trimmed the amount of cash banks must place in reserve three times since December 2011 to encourage lending.

The PMI figure, compiled by information services provider Markit and released by HSBC, tracks manufacturing activity and is a closely watched barometer of the health of China's economy.

"The figure, after being seasonally adjusted, might indicate a weaker economic rebound in February due to the uncertainty in overseas economies and a lack of clarity in China's fiscal and monetary policies ahead of the two sessions," Liao told AFP.

The "two sessions" is a Chinese reference to the annual meetings of the country's top legislative and political advisory bodies in March, which will set the tone for the country's economic policies.

"Given the HSBC PMI index is just preliminary, we'll have to wait for the official PMI to gauge the momentum of China's growth recovery," Liao added.

The official PMI, released by the China Federation of Logistics and Purchasing and the National Bureau of Statistics on a monthly basis, focuses more on large and medium companies, while the HSBC PMI covers mostly small firms.