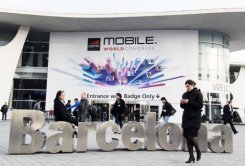 PPeople walk outside the Mobile World Congress in Barcelona. The $1.0 trn (750 mn euro) global mobile industry predicts a boom in subscribers to 4 bn by 2018, as the world's largest mobile fair opens in Barcelona, Spain.

Already, 3.2 billion people pay for mobile services, nearly half of the world's population, said a study by A. T Kearney and GSMA, which represents 750 mobile operators and organises the vast, four-day annual Mobile World Congress.

The report forecast that a further 700 million subscribers would be added by 2017 and the four billion-subscriber mark would be hit in 2018.

Revenues for mobile operators alone amounted $1.0 trillion, or 1.4 percent of the world's gross domestic product, in 2012, the report said.

Most of the growth was in the Asia Pacific region, where operators were forecast to raise revenue by 4.0 percent a year up to 2017, adding $80 billion, or 23 percent, to their revenue of $350 billion, the study said.

But Africa showed the fastest growth, and mobile operators there were predicted to boost revenue by 25 percent over the 2012 to 2017 period to 70 billion dollars.

Worldwide, the growth in mobile operators' revenues was expected to slow, however, from a 4.0-percent annual expansion from 2008 to 2012 to an annual pace of 2.3 percent in the period up to 2017.

"One of the reasons for the slowdown is the decline of revenues in Europe," the report said, blaming "heavy regulation" of mobile prices, and impact of the eurozone economic crisis for an estimated fall in revenue from $248 billion to $216 billion from 2008 to 2012.

"The mobile operator market in Europe is expected to decrease further by 2.0 percent a year to 2017 due to competition and regulation. This trend, together with the growth in traffic, show the increasing value to consumers, who are using mobile services more while spending less," it said.

"In Europe it is still too early to judge consumer reaction to the new services but it is certainly true that operators are positioning 4G as a premium service," the report said.

The use of mobile phones was exploding, the GSMA report said.

But the industry urged regulators to use a light touch.

"The mobile communications industry is creating a mobile economy, both directly through network investment, job creation and contributions to public funding, and by transforming adjacent industries such as education, healthcare, payments, transportation and utilities," said GSMA director general Anne Bouverot.

"But to fully realise this future and to enable the mobile industry to maximise its investments, it is essential that we establish a light-touch regulatory environment, based predominantly on competition, and develop new business models that will allow all ecosystem participants to benefit from the mobile economy."

Clooney, U2 among honorees at glitzy Washington gala