US political leaders Tuesday traded blame rather than fixing a row threatening the fragile economy. 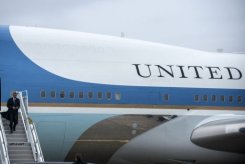 US President Barack Obama speaks during an event at Newport News Shipbuilding on February 26, 2013 in Newport News, Virginia. US political leaders traded blame rather than fixing a row threatening the fragile economy.

President Barack Obama traveled to a Virginia shipyard that builds nuclear-powered aircraft carriers and submarines for the US Navy, amid fears the cuts, known as the sequester, will damage America's defense readiness.

"These cuts are wrong, they are not smart, they are not fair," Obama said in a vast assembly hall at Newport News Shipbuilding, with a yet-to-be-attached ship propeller behind him, and the nose section of a submarine to his right.

"They are a self-inflicted wound that doesn't have to happen."

But Republicans accused Obama of exploiting the military and refused to accept his demand to raise more taxes on the rich and corporations as part of the solution to the showdown over $85 billion in cuts due to hit on Friday.

Bernanke, in prepared testimony to Congress, cited data from the Congressional Budget Office predicting that the cuts in defense and discretionary domestic spending could reduce economic growth by 0.6 percent.

"The Congress and the administration should consider replacing the sharp, front-loaded spending cuts required by the sequestration with policies that reduce the federal deficit more gradually," he said.

"Given the still-moderate underlying pace of economic growth, this additional near-term burden on the recovery is significant."

The White House said the sequester would see 90,000 civilian defense workers furloughed in Virginia alone and would delay maintenance of 11 naval vessels.

It warns of a "perfect storm" of nationwide airport delays and less secure US borders when cuts happen, says pre-school programs could be hit, teachers will be laid off, emergency services will see funds cut and public services will be reduced.

Republicans accuse the president of resorting to scare tactics and are balking at raising new revenue, after losing a showdown with the newly re-elected president last year over raising tax rates on the rich.

They are willing to close loopholes, but only in the context of a sweeping overhaul of the tax system which could see rates for the wealthy fall.

Republican House Speaker John Boehner accused Obama of using "military men and women as a prop in yet another campaign rally to support his tax hikes."

And he denied Republicans had done nothing to stop the sequester, as the House has voted twice to reframe the cuts -- though the bills lack the revenue hikes Obama demands.

"We should not have to move a third bill before the (Democratic-led) Senate gets off their ass and begins to do something," Boehner said.

Several attempts were underway in Congress to give Obama authority to spread the cuts more evenly, but the president said it was too late to finesse the sequester, and only a balanced revenue and cuts deal would work.

"You don't want to have to choose between let's see, 'do I close funding for the disabled kid or the poor kid? Do I close this navy shipyard or some other one?'" the president said.

The idea for the automatic, arbitrary budget cuts emerged as a way to defuse a previous spending showdown between Obama and Republicans in Congress.

The massive reductions to the military and domestic budget were supposed to be so severe that both sides would be forced into a deal to cut the deficit. But Washington is so dysfunctional that no agreement has been reached.

Senate Republican minority leader Mitch McConnell said Obama was blaming political foes for the consequences of his own actions.

"The president's been running around acting like the world's going to end because Congress might actually follow through on an idea he proposed and signed into law -- all the while pretending he's somehow powerless to stop it."

The White House argues that Republicans are equally to blame for the sequester, as it was passed by both chambers of Congress before Obama signed it into law.

There seems little prospect that Washington's feuding politicians will agree to halt the sequester before it comes into force on Friday.

The first point of possible compromise may then come with a bill due at the end of March to fund the government's operations, with Obama betting that pressure will rise on Republicans to seek a compromise.