US Army private Bradley Manning told a military tribunal that he leaked secret files on the wars in Iraq and Afghanistan to WikiLeaks in order to start a "public debate." 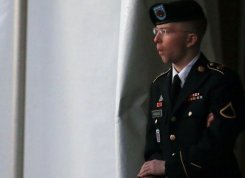 Bradley Manning is escorted from a hearing, on January 8, 2013 in Fort Meade, Maryland. Manning has told a military tribunal that he leaked incident logs from the wars in Iraq and Afghanistan to WikiLeaks in order to start a "public debate".

Reading a nearly hour-long statement in a firm and assured voice, Manning said that when he deployed to Iraq he found himself alienated from his comrades and at odds with an army that "seemed not to value human life."

The 25-year-old, who is being held in military custody pending trial, said he would plead guilty to ten of the less serious of the 22 charges against him, but would deny aiding America's enemies, a crime which carries a life sentence.

The court has agreed to accept his plea on the lesser allegations -- under which Manning faces 20 years in military custody for leaking classified material to Australian activist Julian Assange's WikiLeaks whistle-blower website.

But the prosecution still intends to pursue the 12 remaining charges.

Reading a statement to the tribunal, Manning said he had initially attempted to contact traditional media outlets -- the Washington Post, the New York Times and Politico -- before deciding to pass the documents to WikiLeaks.

He admitted he could have gone up the chain of command to the military's press office, but said he didn't think it would have done any good, adding: "That's not how we do business."

He sent WikiLeaks, which campaigns against government secrecy and publishes leaked information on a secure website, two military logs of daily incidents during the US campaigns in Iraq and Afghanistan.

"For me they represent the underground realities of the conflicts of Iraq and Afghanistan," Manning told the court.

"At the time I believed, and I still believe, these are two of the most significant documents of our time," he said, adding that he wanted to "spark a domestic debate of the role of the military and foreign policy in general."

He also provided a vast trove of US diplomatic cables and cockpit video from a US helicopter gunship involved in an incident in which Iraqi civilians died.

Manning said he uploaded the first batch of war logs to WikiLeaks from a Barnes & Noble bookstore in Rockville, Maryland, after losing his Internet connection in a blizzard.

He said he had chosen to work with WikiLeaks as it seemed to him, from what he had read, that the group "exposed illegal activities and corruption" and was "almost academic in nature."

But he said he never aimed to put US policy or personnel in danger, insisting he only leaked documents he was "absolutely sure" would not harm the country.

Manning presented himself during the statement as a young soldier interested in "geopolitical matters and information technology."

He said he had enlisted at age 20 "to get some real world experience and, under the GI bill, get some college opportunity."

"The more I tried to fit in at my work, the more I seemed to alienate my peers," Manning explained. The incident with the helicopter gunship, whose cockpit video he leaked, horrified him.

"We became obsessed with capturing and killing human targets," he said.

Manning also recounted an episode in which he was asked to look into the detention of 15 people by the Iraqi federal police.

When he determined that their crime had been to print critiques of corruption by the government of Iraqi Prime Minister Nuri al-Maliki, his superiors told him to drop the matter.

"I couldn't believe what I heard," he declared.

Manning said the more cables he read, the more convinced he became that such information should be made public, adding: "As an analyst, I always want to figure out the truth."

Manning's plea offer was presented to a military tribunal at Fort Meade in Maryland by his lawyer David Coombs, and the young soldier confirmed to the court that he understood the implications of his offer.

Under the plea, he admits to "unauthorized possession and willful transmission" of the video and of documents recounting civilian deaths during US operations in Iraq and Afghanistan.