Venezuela on Tuesday accused its enemies of causing ailing President Hugo Chavez's cancer and expelled two US military officers for an alleged plot to destabilize the nation. 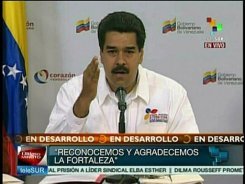 This videograb taken from Telesur news network shows Venezuelan Vice-President Nicolas Maduro speaking in Caracas on March 5, 2013. Venezuela said Tuesday it was expelling a second US embassy official for unauthorized contacts with Venezuelan military officials and conspiracy amid the illness of ailing President Hugo Chavez.

Caracas lashed out against the opposition and the United States after announcing that Chavez had taken a turn for the worse and was struggling to breathe after contracting a new and severe infection.

Vice President Nicolas Maduro confirmed that the firebrand leader was facing "complications" and he warned that Venezuela was living its "most difficult hours" since Chavez underwent cancer surgery on December 11.

After a meeting with the country's civilian and military leadership, Maduro said a scientific commission would be formed and that it would reveal that Chavez "was attacked with the disease."

"The enemies of his nation looked for how to harm the health of our commander," he said in televised remarks, drawing a parallel with a probe into allegations that the late Palestinian leader Yasser Arafat was poisoned.

The government then announced it was expelling two US Air Force attaches, accusing them of contacting Venezuelan military officials to get information about the armed forces and to foment "destabilization projects."

A US military spokesman said it was aware of the allegations and that one of the air attaches, Colonel David Delmonico, was "en route back to the United States."

The once omnipresent face of the Latin American left, now breathing with the aid of a tracheal tube, has neither emerged nor spoken in public in almost three months, leaving the nation and the region gripped by his absence.

At the military hospital where he is being treated in Caracas, dozens of supporters prayed, held photos of Chavez and wept in the chapel of "hope" that was built for the 58-year-old leader.

"I came to pray because the news was shocking and we have to face it by not losing faith and hope," said Marta Rodriguez, a 50-year-old housewife.

"I ask God for a miracle for the president to get healthy, for him to get out of this difficult situation. The president is a very special person."

After claiming over the weekend that Chavez was still working despite his chemotherapy, the government announced on Monday that he had a "new and severe infection" and a "worsening of respiratory function."

Information Minister Ernesto Villegas, reading a statement from the hospital, did not specify the type of infection nor did he give a prognosis, leaving open the question of whether Chavez will ever resume his duties.

Villegas said Chavez continues to "cling to Christ and life" and that his "condition continues to be very delicate."

The gloomy prognosis came two weeks after Chavez checked into the military hospital on February 18 following two months of treatment in Cuba.

His prolonged absence -- which prevented him from being sworn in to a new six-year term earlier this year -- has angered the opposition, which accuses the government of lying about his condition.

Under the constitution, an election must be called within 30 days if the president is incapacitated. Before his operation, Chavez urged Venezuelans to vote for 50-year-old Maduro if he is unable to return.

A group of lawyers said they were going to ask the Supreme Court to name a medical panel to assess whether Chavez is fit to stay in power or if elections are needed -- a request that the justices have rejected before.

"This situation of uncertainty and anarchy must be resolved to prevent the country from entering a critical political and institutional situation," former Supreme Court justice Roman Jose Duque told reporters.

Maduro and senior officials have lashed out at the opposition and branded rumors that Chavez is dead or dying a campaign to destabilize Venezuela.

Officials have released only one set of photos showing him in his Havana hospital bed, smiling with two daughters, three days before his homecoming. The scarcity of fresh images has fueled the rumors.

The government has sent mixed messages about Chavez's condition, saying last week that he was still suffering from respiratory problems before declaring the next day that he had held a five-hour meeting with aides.

The government has never disclosed the exact nature, location or severity of the cancer, saying only that it was in the pelvic region.

Maduro revealed for the first time Friday that Chavez began receiving a tough new round of chemotherapy in Cuba, and that the struggling leader had decided to continue the treatment in Caracas.

Chavez was re-elected to a six-year term in October but was unable to attend his January 10 inauguration. The Supreme Court approved the swearing-in ceremony's indefinite delay.