Aung San Suu Kyi was re-elected as Myanmar opposition chief Sunday at a landmark congress that disappointed some members hoping for new blood in the wider leadership ahead of a key 2015 election. 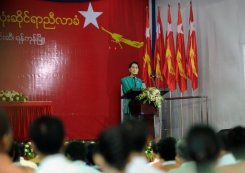 Myanmar democracy leader Aung San Suu Kyi speaks to the media at a press conference in Yangon on March 10, 2013. Suu Kyi was re-elected Myanmar opposition leader at a landmark congress that stopped short of sweeping changes in its ageing top ranks ahead of key elections in 2015.

Hundreds of National League for Democracy (NLD) members gathered in Rangoon for their first national conference -- a display of political strength that would have been unthinkable under the former junta.

The meeting highlighted the myriad challenges facing the hugely popular opposition, including its lack of experience as well as party infighting, as it eyes victory in key elections due to be held in 2015.

"We have to seize the chance," Suu Kyi, a former political prisoner who entered parliament last year, urged the estimated 850 representatives who attended the three days of talks.

"I thank the members who struggled hand-in-hand with the NLD for 25 years, and I also welcome our new members," she said. "A party can be energetic if it's refreshed with new blood all the time."

The party had faced calls among younger members to rejuvenate its leadership, dominated by elderly activists including some in their 80s and 90s known as the "NLD uncles".

But it held back from a substantial revamp, instead selecting older veteran party members for a core executive of 15 and unanimously reappointing Suu Kyi as chairwoman.

"We are not completely satisfied. We accept their decision and we will support it. But we do want more new blood among the leadership," said an NLD youth member who asked not to be named.

"We want to see people in their 40s and 50s who are educated and have experience in politics being more involved."

"That's our main concern -- most of our senior leaders are getting old," he said.

"That's why we have decided that the capacity of our youth must be built up and we must recruit some competent people from outside."

After being sidelined by Myanmar's military rulers for two decades, the NLD entered the political mainstream last year as a result of sweeping reforms initiated by a new reformist government.

Experts question whether the party is ready to run an impoverished nation whose economy, education and health systems were left in tatters by the corrupt former junta.

"They could not take power over the country tomorrow. They are not ready. They have a lack of capacity," said a Western diplomat who did not want to be named.

The NLD faces the financial and political might of President Thein Sein's Union Solidarity and Development Party (USDP), created by former generals who shed their uniforms to run for office in controversial elections held in 2010.

The congress is the latest sign of the dramatic changes seen in Myanmar since a quasi-civilian regime, led by former general Thein Sein, took power in 2011, ending years of isolation and heralding a flood of aid and investment.

Suu Kyi, 67, has said she is ready to become president if the NLD takes power, but a constitutional rule now bars her from the role as she was married to a Briton and has two sons who are foreign nationals.

The NLD -- which says it now has 1.3 million members across the country -- swept to a landslide election victory in 1990, when Suu Kyi was under house arrest, but the junta never recognised the result.

The party refused to take part in polls in 2010 mainly because of rules that would have forced it to expel imprisoned members.