The Philippines was set to open a $1.2 billion giant casino on Saturday in a high-stakes bid to join the world's elite gaming destinations. 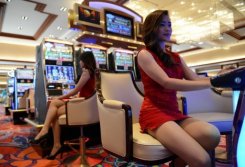 Employees of Solaire Manila Resorts and casino pose for a photo next to gaming machines inside the casino, in Manila, on March 14, 2013, ahead of its Saturday opening. Solaire Manila Resorts is the first of four huge entertainment venues slated to rise on reclaimed land on Manila Bay that industry and government officials hope will draw millions of newly well-off Asian visitors.

"What Solaire brings is an entertainment and gaming experience that doesn't exist in the Philippines today," its American chief operating officer Michael French told AFP in an interview earlier this week.

"The gaming experience here will probably be as good, if not even better, than what they (customers) can achieve in Las Vegas."

Another wing is being built to add 300 all-suite hotel rooms, 30-40 high-end shops and a theatre for travelling Broadway shows as well as local and foreign lounge acts.

President Benigno Aquino, who heads a high-powered guest list, expects it to jumpstart a Philippine tourism industry that lags behind its neighbours, his spokeswoman Abigail Valte said before the 2:00pm (0600 GMT) opening ceremony.

"It's not just for the high rollers but also for families who may want to travel and visit the Philippines. The idea really is to make it the jump-off point to our major tourist spots," she said on government radio.

Preparations are also underway for the launch of the three other big-ticket casinos, which all involve major foreign backers. The four will together make up "Entertainment City" near Manila's airport.

Japanese gambling magnate Kazuo Okada and Malaysia's Genting Group are involved in the other two, each in partnership with local Chinese-Filipino tycoons. Both are expected to open between 2015 and 2017.

When all four are open, Entertainment City should boost the country's annual gaming revenues up to $10 billion, he said.

The turnover at present comes from 13 relatively small casinos around the country run by the government and a bigger one in Manila run by Genting and a Filipino tycoon that opened in 2009.

While Macau counts $38 billion in annual revenues, Naguiat is confident the Philippines will eventually have one of the biggest gambling industries in the world, comparing it with the Las Vegas strip's roughly $6-billion turnover.

"We will beat Las Vegas. I'm pretty sure of that," he said.

Ho, who flew to Manila Friday on the eve of the launch of Belle Grande's rival, projects Philippine gaming revenues to grow to $3 billion by 2015 with both Solaire and Belle Grande in operation.

"If you project that and extrapolate it even further down the road, the Philippines in five, six years could be effectively the size of Las Vegas or Singapore," he said, referring to the other two global gaming hubs.

US hits Cambodia with arms embargo over China ties