All Sudan political prisoners to be freed: Bashir
World

All Sudan political prisoners to be freed: Bashir

Sudanese President Omar al-Bashir said on Monday that he will release all political detainees, a move welcomed by the opposition as tensions ease with South Sudan. 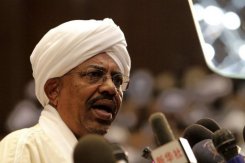 "Today, we announce a decision to free all the political prisoners and renew our commitment to all political powers about dialogue," Bashir said in a half-hour speech opening a new session of parliament.

"We confirm we will continue our communication with all political and social powers without excluding anyone, including those who are armed, for a national dialogue which will bring a solution to all the issues," the president said.

Farouk Abu Issa, who heads the opposition alliance of more than 20 parties, said Bashir's announcement was "a step toward genuine dialogue".

He said the rebel Sudan People's Liberation Movement-North (SPLM-N), which has been fighting government forces for almost two years in South Kordofan and Blue Nile states, had been demanding a prisoner release.

"Very good news," said Farouk Mohammed Ibrahim, of the Sudanese Organisation for Defence of Rights and Freedoms, a group of activists.

He said there are "a large number" of detainees in South Kordofan and Blue Nile. These include 118 SPLM-N prisoners whose cases are being handled by his organisation in southern Blue Nile alone.

"It's a step forward," Ibrahim said.

But SPLM-N chairman Malik Agar declined comment on Bashir's announcement, saying he was "not sure which political prisoners he is referring to".

A diplomatic source called Bashir's statements positive but said it is too early to know where they are leading.

"We should wait until we see clear results," said the source, asking for anonymity. "Action is what counts here in Sudan."

Bashir's speech elaborated on an offer made last week by Vice President Ali Osman Taha, who reached out to the SPLM-N and opposition political parties, whom he invited to join a constitutional dialogue.

Sudan needs a new constitution to replace the 2005 document based on a peace agreement which ended a 23-year civil war and led to South Sudan's separation in July 2011.

Bashir's regime had long rejected negotiations with the insurgents.

In a written message to AFP on Monday, Agar reiterated the rebels want talks on the basis of UN Security Council Resolution 2046, "full stop".

The resolution, passed in May last year, called for an end to fighting between Sudan and South Sudan along their disputed frontier and demanded talks to settle outstanding issues including the war between Khartoum and the SPLM-N.

Negotiations should occur on the basis of a deal which the SPLM-N signed in June 2011 with Bashir's assistant Nafie Ali Nafie, the UN said.

That agreement, which was not implemented, recognised the SPLM-N as a legal political party and committed the two sides to a national vision that recognised the country's diversity.

Last week Agar said the government had been misleading by mooting negotiations under the 2005 Comprehensive Peace Agreement which ended Sudan's civil war.

The CPA led to South Sudan's independence after an overwhelming vote in a referendum.

South Kordofan and Blue Nile both have large non-Arab communities and were also promised "popular consultations" under the CPA.

"The popular consultation got buried with the end of the CPA," Agar said.

South Sudan armed and trained SPLM-N when it was part of the south's rebel force but says it cut military ties before the South's independence.

Khartoum's accusation that the South continued to back SPLM-N in South Kordofan and Blue Nile was the major impediment to improved bilateral relations with the government in Juba.

An estimated one million people have been affected by the fighting inside South Kordofan and Blue Nile.