The UN General Assembly on Tuesday passed the first treaty regulating the conventional arms trade in an attempt to bring transparency and protection of human rights to the often murky industry. 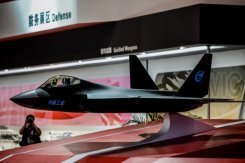 Machine guns are displayed during a security fair in Paris in 2011. The UN General Assembly on Tuesday passed the first treaty regulating the conventional arms trade in an attempt to bring transparency and protection of human rights to the often murky industry.

Only Syria, North Korea and Iran -- which had blocked the measure last week -- voted against, but two of the world's most prolific arms traders, Russia and China, and major buyers Egypt and India, were among the 23 that abstained.

The treaty has no automatic enforcement, but seeks to push the weapons industry to take human rights into account.

Countries abiding by the treaty would establish national controls on arms exports, and would have to ensure that weapons being exported would not be used in genocide, war crimes, or by terrorists or organized crime.

UN leader Ban Ki-moon called the treaty an "historic diplomatic achievement -- the culmination of long-held dreams and many years of effort."

"It will be a powerful new tool in our efforts to prevent grave human rights abuses or violations of international humanitarian law... And it will provide much-needed momentum for other global disarmament and non-proliferation efforts," he said in a statement.

Brian Wood, Amnesty International's head of arms control and human rights, followed suit, saying "the world has been waiting a long time for this historic treaty."

The UN assembly voted by an overwhelming 154-3 margin for the resolution.

Individual nations can start ratifying the accord as of June, and once the 50th approves -- a process that could take one to two years -- the treaty will take effect.

British Prime Minister David Cameron called it a "landmark agreement that will save lives and ease the immense human suffering caused by armed conflict around the world."

However, Chinese ambassador Li Baodong said Beijing "is not in favor of pushing a multilateral treaty through the General Assembly... It is a negative precedent. We should negotiate by consensus."

And among the few casting no votes, North Korea's UN representative Ri Tong-Il called the treaty "unbalanced," saying it did nothing to curb exports, while failing to stop "the diversion to non-state actors."

There was also criticism from the Conflict Awareness Project, a non-governmental research organization, which said the treaty left a huge loophole for the middlemen in arms dealing networks.

"Since the broker is the central actor using the cover of legitimate business to divert weapons into the illicit trade, of all actors, this is the one requiring the strictest regulation," CAP's executive director Kathi Lynn Austin said.

"States that are serious about impeding illicit arms trafficking and protecting the legitimate trade in arms should implement a mandatory licensing and registration regime for all arms brokers," she said.

"Until then, these middlemen remain comfortably assured of conducting their lethal business as usual."

There was especially strong support for the treaty during 10 days of arduous negotiations at the United Nations from African and Latin American states, which for decades have been among the prime markets for weapons exports.

The United States -- the world's biggest arms dealer, with 30 percent of the market -- was another big backer, although ratification by Congress is not assured.

Russia says it has not yet decided whether or not to ratify the text, claiming there are "omissions" in the treaty and "doubtful" provisions, such as the failure to control arms transfers to non-state groups.

Russia said it is worried about weapons getting into the hands of Chechen rebels, although for two decades the main sources of new weaponry in the tiny Caucasian province have included corrupt Russian suppliers and even military personnel.