One dead in clashes after funeral of Egypt Christians
World

One dead in clashes after funeral of Egypt Christians

One person has been killed in clashes at Cairo's Coptic cathedral after funeral prayers for four Christians during which angry Copts chanted against Islamist President Mohamed Morsi, an official said. 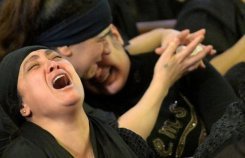 Egyptian riot police stand by during sectarian clashes outside the Egyptian Coptic Cathedral in Cairo's Abbassiya neighbourhood on April 7, 2013. One person was killed on Sunday in clashes at Cairo's Coptic cathedral after funeral prayers for four Christians during which angry Copts chanted against Islamist President Mohamed Morsi, an official said.

Also on Sunday fighting between Christians and Muslims erupted anew in a town north of the Egyptian capital where sectarian violence killed five people on Friday, including the four Coptic Christians, police said.

The bitter clashes underscore the simmering tensions in a divided Egypt that has seen violent confrontations between Morsi's main Islamist allies and a wide-ranging opposition.

They also highlight sectarian tensions that have been brewing for several years.

Morsi, in a call to Coptic Pope Tawadros II, late on Sunday condemned the violence.

He ordered "an immediate investigation" into the clashes and condemned the clashes at the cathedral as "an attack on myself", according to a statement published by the official MENA news agency.

He also affirmed that "the protection of all citizens, Muslims and Christians, is the responsibility of the state".

Catherine Ashton, the European Union's foreign policy chief who met with Morsi and other leaders in Cairo Sunday, said she was "extremely worried about the violent incidents."

"On hearing the news I immediately contacted the Presidency, strongly urging restraint and for the security forces to control the situation," Ashton said in a statement.

Witnesses to the Cairo clashes said they began when mourners were pelted with stones by residents of the area as they left the cathedral, symbol of the Coptic community which has long complained of discrimination and marginalisation.

Black-clad riot police intervened, firing tear gas at the cathedral, witnesses said, but not before one person had been killed.

The health ministry identified him in a statement as 30-year-old Mahrus Hanna Ibrahim Tadros -- a Coptic name -- and said at least 84 people were wounded in the violence.

-- 'We chanted 'Down with the Brotherhood rule' --

Hani Sobhi, a young Copt, explained that live television coverage of the funeral service had been the spark for the latest violence.

"Inside the cathedral we chanted 'Down with the Brotherhood rule' and that was aired live on television. At the exit (of the cathedral), the people were ready and waiting for us," he said.

There were scenes of chaos outside the cathedral in the central Cairo neighbourhood of Abbassiya where Coptic bishops had been calling for peace and calm after the killings on Friday.

Loud blasts could be heard, as clouds of smoke rose up into the sky and people ran in several directions.

Rows of Abbassiya residents hurled rocks and bottles at the cathedral and were met in kind from Copts inside the church complex.

The mourners had been planning to carry the bodies of the Christians out of the cathedral to the presidential palace as a protest against the violence, one of them said.

A group of volunteers arrived at the church with medical supplies, an AFP reporter said.

In a statement, the interior ministry said "a number of mourners began to damage cars in the area which led to confrontations with residents of the area".

Sunday's service was being held for the four Christians killed in the sectarian clashes two days earlier.

One Muslim was also killed in the violence in Al-Khusus, a poor area in Qalyubia governorate, that flared after a Muslim in his 50s objected to children drawing a swastika on a religious institute.

The man insulted Christians and the cross, and an argument broke out with a young Christian man who was passing by, escalating into a gun battle between Muslims and Christians in which assault rifles were used.

The incident sparked rioting during which a church was partially burnt and a Christian's home torched, while a pharmacy owned by a Copt was ransacked.

"There are clashes between Christians and Muslims, and some youths are also clashing with police," a police officer in Al-Khusus told AFP by telephone.

Christians form between six and 10 percent of Egypt's population of nearly 83 million people.

The country's Coptic Christians and Muslims have clashed on several occasions since the revolution that toppled president Hosni Mubarak in February 2011.

Around 50 Christians and several Muslims have been killed in the clashes.

Trees could cut urban heatwave mortality by a third: study