Mother and devoted wife: The private life of Margaret Thatcher

Behind the black door of 10 Downing Street, in her private life Margaret Thatcher was a housewife mother of sometimes troubled twins, supported by her ever-loyal husband Denis. 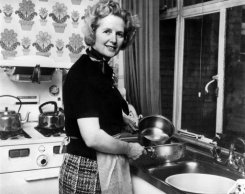 A picture dated February 1975 shows British Conservative Party leader Margaret Thatcher, then 49, posing in the kitchen of her Chelsea home in London following her February 11, 1975 election at the head of the Tory.

In her autobiography she wrote: "I could never have been prime minister for more than 11 years without Denis by my side."

The prime minister dubbed the "Iron Lady" applied her relentless work ethic to home life, overseeing the rearing of her children Mark and Carol and performing domestic duties -- with Denis' help.

Mark, in particular, would spark unwelcome headlines later in life, being fined by a South African court for the role he played in financing an attempted coup in Equatorial Guinea in 2004.

Margaret Thatcher was imbued with her economic and political outlook by her grocer father Alfred, a Methodist preacher, grocer and local councillor in the eastern English town of Grantham.

But she also had the housewife instincts of her mother Beatrice and would think nothing of immersing herself in domestic duties while political storms raged around her.

Discussing her private life in detail was never something that came easily to her.

And her businessman husband Denis was even less likely to give details away -- his trump card being his blank refusal to speak to what he called the "reptiles" of the press.

However, in her 1996 biography of her father, Carol Thatcher shed light on how the family operated behind closed doors, with Denis letting Margaret get on with her career while he continued with his.

"If marriage is either a takeover or a merger, then my parents enjoyed the latter," she wrote.

Denis Thatcher first met his second wife in February 1949 when she was 23 and he 34. Some friends of his were having the young parliamentary candidate over for dinner after watching her give a speech.

Denis, a wealthy, shy divorced man who served in World War II and inherited his father's paint factory, gave her a lift back to London, out of courtesy.

Asked whether Margaret fell in love at first sight, Denis said: "No; there were two elections to fight first. She stood for Dartford twice and lost twice and the second time she cried on my shoulder I married her."

Her twins Mark and Carol were born by cesarean section six weeks early. She felt unwell during her pregnancy and given that she had a child of each sex, did not feel the need to have any more offspring.

The future prime minister's work ethic applied to the family home in Chelsea, west London, where she juggled her job, studying for her exams to become a lawyer, organising the household, shopping, sewing, cooking and ironing.

Their nanny Barbera recalled: "She did everything -- she was so ultra-efficient that it was very difficult to fault her.

"Mrs Thatcher always got her own way because Mr Thatcher allowed her to. She'd say, 'We've got to go to this, this and this.' And he said, 'Oh well,' and accepted it."

The Thatchers were not the type to lounge around on holiday either, preferring sight-seeing rather than relaxing by the pool.

While he relished a gin and mixer, Thatcher was partial to a whisky to keep her going during the long nights writing speeches.

She reportedly slept for only four hours a night and her husband was the only one who could order her to bed and relieve her exhausted staff.

Fiercely anti-socialist, Denis agreed with her on everything politically except her support for capital punishment. However, he never strayed into her political life.

Behind the press caricature of a henpecked husband who found his escape in gin and golf, he was always steadfastly loyal.

Margaret Thatcher oversaw the twins' upbringing, but let them make up their own minds on how they wanted to live their lives.

Mark did give his mother cause for concern, such as when he went missing for six days in the Sahara Desert while competing in the 1982 Paris-Dakar rally.

And then in 2004 came the the fine in South Africa for putting up money to back the attempted coup in Equatorial Guinea.

Carol too had her difficulties.

She began her career as a journalist in Australia before returning to work in Britain. She lost a BBC television job in 2009 due to some racially sensitive remarks.

In the most recent public vote won by a Thatcher, Carole triumphed in the 2005 edition of a popular British programme where celebrities endure gruelling tests in the Australian bush, including eating kangaroo testicles.

Forced out of office in 1990, Thatcher found it difficult to slow down.

She initially struggled to make phonecalls, having not had to dial a number since 1979, and would often reach for the phone to sort out an international crisis she had seen on the news, before stopping herself, according to her daughter.

Little is known of how Thatcher spent her final years at home in her four-storey townhouse in London's plush Chester Square.

The former premier lived in the company of her carers, with occasional visits from close friends. Frail, unsteady on her feet and blighted by dementia, she avoided state occasions but did make occasional outings for dinners.

She was pictured in March 2012 sitting in a London park, white-haired and stroking a passing dog as her carers stood close by, a far cry from her former place centre-stage in world affairs.