Venezuelan presidential election loser Henrique Capriles urged the government to open a dialogue with him and he called off a protest rally after the disputed vote sparked deadly violence. 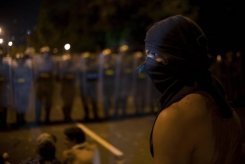 Venezuelan President Nicolas Maduro (C) is greeted by supporters after a visit to the Integral Diagnosis Centre (CDI) in Caracas on April 16, 2013. Presidential election loser Henrique Capriles urged the government to open a dialogue with him and he called off a protest rally after the disputed vote sparked deadly violence.

The political crisis in the oil-rich country deepened as protests, which have left at least seven people dead and dozens injured, swept parts of Caracas and other Venezuelan cities for a second day.

Repeated demands by the defeated hopeful for a recount -- which had the backing of the United States and the Organization of American States -- have been rejected, setting the two sides on a collision course.

On Tuesday, Capriles addressed his remarks to Maduro's government.

"We are ready to open a dialogue with the government so that the crisis can be ended in the coming hours," the opposition leader told reporters.

"As of now, I have not heard from Mr Maduro any solution for the problem the country is going through ... an idea to get out of this crisis."

Capriles pressed for a recount, but the National Electoral Board declared Maduro the winner.

On Tuesday, Maduro said he was barring a march Capriles had planned to lead on Wednesday to the headquarters of the electoral board.

Capriles later called it off altogether, so as to avoid violence. He said a march would play into the government's hands. "The government wants people to die in this country," he said.

But Capriles did call on people to bang pots and pans together this week -- a common form of protest across Latin America -- especially when Maduro is sworn in Friday to complete Chavez's term, which started January 10.

By Tuesday morning, besides the deaths, government officials were reporting 61 injured and 135 arrested around the country.

Maduro has blamed "fascist mobs" for the violence and reiterated charges that the opposition was fomenting a coup.

Capriles has in turn blamed Maduro and the government for the violence.

Tensions have soared since the National Electoral Council -- dominated by Chavistas -- proclaimed Maduro the victor.

Groups of Chavistas, dressed in red and carrying Venezuelan flags, gathered Tuesday at various points in Zulia, Anzoategui, Carabobo and Apure states in shows of strength after a night of pot-banging and street protests by the opposition.

Thousands of anti-government protesters on Monday took to the streets of Chacao, an opposition stronghold in eastern Caracas, painting walls with the message: "Fraud, they stole our vote."

In one incident, a 45-year-old man was shot dead Monday night in the Caracas suburb of Baruta while demonstrating in support of Maduro, Foreign Minister Elias Jaua said, with a 44-year-old woman also wounded.

"We should calm down," Arlynn Rojas, 21, told AFP. "What they are doing is calling for a confrontation, instead of looking for peace. The country is very divided, there is a lot of anger, resentment and this is very dangerous."

The United Thai Nation (UTN) Party now has a prime ministerial candidate in mind and insists it will win enough seats in parliament to enable it to nominate a prime minister.

The Joint Standing Committee on Commerce, Industry and Banking (JSCCIB) is opposing the Pheu Thai Party's pledge to raise the daily minimum wage to 600 baht because it could affect the business sector's competitiveness.

Mingkwan Sangsuwan who joined the ruling Palang Pracharath Party, faces a challenge from key figures within the party over its choice of prime ministerial candidates.