A prominent rebel group from Russia's North Caucasus on Sunday denied any link to the deadly Boston Marathon bombings that have been blamed on two ethnic-Chechen suspects. 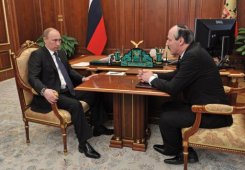 People visit a make-shift memorial on Boylston Street on April 20, 2013, near the scene of the Boston Marathon explosions. A website used by Russia's North Caucasus rebels denied Sunday any link to the deadly blasts that have been blamed on two ethnic-Chechen suspects.

"The command of the Vilayat Dagestan mujahedeen... declares that the Caucasus fighters are not waging any military activities against the United States of America," said a statement posted on the rebels' Kavkazcenter.com and Vdagestan.info websites.

"We are only fighting Russia, which is not only responsible for the occupation of the Caucasus, but also for monstrous crimes against Muslims," the rebels said.

Both sites are viewed as mouthpieces of the North Caucasus guerrillas and are banned from being cited by the Russian media.

US news reports had earlier said the FBI was studying possible links between the two main suspects -- brothers Dzhokhar and Tamerlan Tsarnaev -- and the Caucasus Emirate movement led by feared warlord Doku Umarov.

A statement issued by the FBI on Friday said Tamerlan had been questioned by the US authorities in 2011 at the request of a foreign government later identified as Russia.

The FBI statement said Moscow believed Tamerlan was "a follower of radical Islam and a strong believer."

But the agency at the time time "did not find any terrorist activity" associated with the older brother and dropped its investigation.

The US media reports said authorities were now especially interested in the Vilayat Dagestan offshoot of Umarov's group.

But the rebels in their statement argued that Umarov never targeted foreigners and did not view them as a threat to his dream of establishing an Islamist state across the southern swathes of Russia.

"The command of the Vilayat Dagestan mujahedeen calls on the US media especially to stop their speculation and not to assist the Russian propaganda," the Internet statement said.

The 19-year-old Dzhokhar is in serious condition in a Boston hospital following a massive manhunt on Friday in which 26-year-old Tamerlan was killed.

Russian authorities said Sunday they were also checking the siblings' links to the fighters but had been unable to find any so far.

"At the moment, we have no credible information about the Tsarnaev brothers' involvement with the Caucasus Emirate movement," an unnamed Russian security source told the Interfax news agency.

Much of the speculation has swirled around the role of the late Tamerlan because he had a YouTube account with a playlist of men he identified as "terrorists" and Islamic preachers.

One link features a nearly hour-long speech by an Islamist with followers among the Dagestani guerrillas, according to intelligence sources in the United States.

One Russian report added that Tamerlan's father Anzor had kicked his son out of his house because he began displaying radical Islamist ideology.

The younger brother Dzhokhar -- badly wounded by the time he was detained by authorities on Friday -- also identified Islam as his "world view" on a Russian social media website.

Dzhokhar also lists information about Chechnya and Islam as well as different mosques around the world.

Dagestan -- a Caspian Sea region of almost three million people with a large ethnic Chechen minority -- has been one of the most violent regions of Russia since the second of two post-Soviet era wars ended in Chechnya about a decade ago.

Caucasus Emirates leader Umarov is widely recognised as Russia's public enemy number one who has staged some of the deadliest bombings in Moscow and across the North Caucasus in the past five years.

He claimed responsibility for a Moscow airport attack in January 2011 that claimed 37 lives as well as earlier twin metro bombings in 2010 in which more than 40 people died.