The Catholic Church in Belgium on Wednesday angrily denounced Femen topless protesters who targeted its primate at a conference though the archbishop himself remained composed and apparently at prayer throughout. 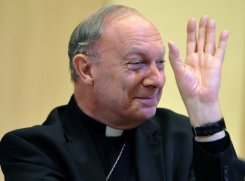 Security guards threw the women out of the hall within minutes as the archbishop remained quietly seated, his hands crossed apparently in prayer.

The Belgian religious leader, a known conservative, has often been criticised for his stand on gay issues.

In March he said homosexuals should practise "a form of celibacy and abstinence" and welcomed protests in France against its gay marriage legislation.

The Church in a statement denounced "the attitude of a few persons... in total contradiction with the theme of the debate and with the manner in which the Catholic Church hopes for dialogue".

US midterms and the strange demise of the political center