The bodies of at least 62 murdered residents have been found in a Sunni neighbourhood of the Syrian city of Banias, the Syrian Observatory for Human Rights said on Saturday. 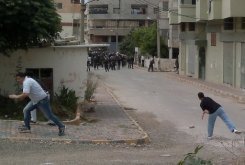 File picture shows men throwing stones at riot police during clashes in the Mediterranean coastal town of Banias in Syria on May 27, 2011. The bodies of at least 62 murdered civilians have been found in a Sunni neighbourhood of the Syrian city of Banias, the Syrian Observatory for Human Rights said on Saturday.

The latest incident was condemned by the opposition Syrian National Coalition, which said reports of several mass killings in the area raised the spectre of a campaign of ethnic cleansing.

"The bodies of dozens of citizens killed on Friday during an assault by the army and Alawite members of the National Defence Forces in the Sunni neighbourhood of Banias were discovered on Saturday," the Observatory said.

"We have identified 62 citizens by their names, photos, or videos, including 14 children, and the number could rise because there are dozens of citizens who are still missing."

The mass killing is the second "massacre" to be reported in the Banias area this week.

On Thursday, the Observatory said at least 50 people had been killed in the Sunni village of Bayda, south of the coastal city.

"Witnesses from the village say no less than 50 civilians were killed, including women and children," the group said.

"Some were summarily executed, shot to death, stabbed or set on fire."

After the deaths, which were reported on Friday, regime forces began shelling several Sunni neighbourhoods of Banias, prompting residents to flee the area early on Saturday.

"They started fleeing at dawn this morning (Saturday) from Sunni neighbourhoods in the south of the city towards Tartus and Jableh," he added.

The Syrian National Coalition condemned "a proliferation of massacres that is transforming into an ethnic cleansing operation like that carried out by Serbian forces in Bosnia 20 years ago."

The conflict in Syria has claimed more than 70,000 lives, according to the United Nations, with numerous incidents of mass killings reported in more than two years of fighting.

On Saturday, the United States said it was "appalled" by the reported killings in Bayda.

"The United States is appalled by horrific reports that more than 100 people were killed May 2 in gruesome attacks on the coastal town of Bayda, Syria," the US State Department said in a statement.

"We extend our deepest condolences to the families of the victims of this tragedy."

Banias has a small majority of Sunni residents, but is situated in the predominantly Alawite region of Tartus.

Telenor Group, the major shareholder of DTAC, has reaffirmed its plan to maintain good governance and high business standards when it merges with True Corporation.

'Terrified' Griner asks for freedom in letter to Biden

Six killed in shooting during US July 4 parade