37 dead as Bangladesh cracks down on Islamists
World

37 dead as Bangladesh cracks down on Islamists

Bangladeshi police broke up a protest by tens of thousands of religious hardliners and shut down Islamist television stations Monday as 37 people died in some of the fiercest street violence for decades. 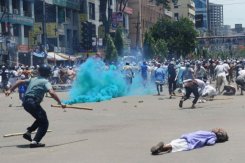 A fire burns as Islamist protestors clash with Bangladeshi police in Narayanganj, some 20 kms from Dhaka, on May 6, 2013. Bangladeshi police broke up a protest by tens of thousands of religious hardliners and shut down Islamist television stations Monday as 37 people died in some of the fiercest street violence for decades.

Hundreds more were injured in running battles as riot police broke up the rally near a commercial district in a pre-dawn raid in the capital Dhaka.

Dozens of demonstrators were arrested, while the leader of the protests was put on a plane to the country's second city Chittagong and the deputy chief was detained in the capital.

Hundreds of bankers and stock market traders had to sleep in their offices as the sound of gunfire echoed around Dhaka's Motijheel Commercial Area through the night.

Shops and vehicles were set alight while roads were littered with rocks that protesters had thrown at police, witnesses said.

Police said they used sound grenades, water cannon, tear gas and rubber bullets to disperse at least 70,000 Islamists who were camped at Motijheel as part of a push for a blasphemy law.

"We were forced to act after they unlawfully continued their gathering at Motijheel. They attacked us with bricks, stones, rods and bamboo sticks," Dhaka police spokesman Masudur Rahman told AFP.

Mozammel Haq, a police inspector at Dhaka Medical College Hospital, told AFP that 11 bodies were brought to the clinic, including a policeman who had been hacked in the head with machetes.

A total of 26 other people were killed in the protests, according to an AFP toll compiled through police and medical officials.

This included eight people killed in the Kanchpur district on the outskirts of Dhaka, said the sources.

And at least two people were killed in the southern coastal district of Bagerhat, where police exchanged gunfire with Islamists, police spokesman Shah Alam told AFP.

Two pro-Islamist television stations which broadcast footage of the raid on Motijheel were forced off the air, journalists at the channels said.

The plug was pulled on Diganta Television and Islamic TV as dozens of plain-clothes policemen stormed into their offices.

UN Secretary-General Ban Ki-moon called for an end to the violence, expressing his sadness at the loss of life, a spokesman said.

The violence erupted Sunday afternoon after police tried to break a blockade of highways leading into Dhaka.

The protests had been instigated by Allama Shah Ahmad Shafi, the leader of Hefajat-e-Islam, who is said to be around 90 years old.

Police managed to persuade Shafi on Monday to leave his madrassa (religious school) in Dhaka, escorting him to the airport from where he was flown to Chittagong.

In a sign of their desire to avoid inflaming tensions, police insisted he was not arrested but left of his own volition.

Junayed Babu Nagori, the secretary general and second-ranked leader of the group, was arrested in the capital, Dhaka police spokesman Rahman told AFP.

Prime Minister Sheikh Hasina has ruled out a blasphemy law, saying she will not cave into hardliners who accuse bloggers of insulting the Prophet Mohammed.

Chanting "Atheists must be hanged", activists from Hefajat-e-Islam marched along at least six highways on Sunday, effectively cutting Dhaka off from the rest of the country.

Police said the number of protesters reached around 200,000 at one point.

Social media networks were inundated with photos of bloodied Islamists lying on the streets after the crackdown.

The main opposition Bangladesh Nationalist Party, which backed Hefajat's blockade, accused the government of "killing hundreds of people and concealing the bodies" but gave no proof.

Fearing more violence, Dhaka police banned all protests and the carrying of firearms.

Bangladesh, officially secular with a 90 percent Muslim population, has seen a surge in violence since the start of the year, when a court began handing down war crimes verdicts related to the 1971 independence conflict.

Three leading Islamists have so far been convicted for their role in mass killings during the conflict, which saw what was then East Pakistan break from the regime in Islamabad.

The overall death toll in violence between religious hardliners and the police since January now stands at around 150.