Conservationists warned that Hong Kong may lose its rare Chinese white dolphins, also known as pink dolphins for their unique colour, unless it takes urgent action against pollution and other threats. 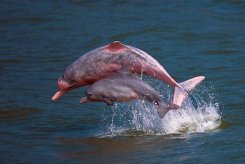 Their numbers in Hong Kong waters have fallen from an estimated 158 in 2003 to just 78 in 2011, with a further decline expected when figures for 2012 are released next month, said the Hong Kong Dolphin Conservation Society.

"It is up to the government and every Hong Kong citizen to stand up for dolphins. We risk losing them unless we all take action," said society chairman Samuel Hung.

Two weeks ago a tour guide from Hong Kong Dolphinwatch spotted a group of pink dolphins helping a grieving mother support the body of her dead calf above the water in an attempt to revive it.

The scene, captured on video and widely shared on Facebook, has raised fresh concerns about the dwindling population in a city where dolphin watching is a tourist attraction.

"We're 99 percent certain the calf died from toxins in the mother's milk, accumulated from polluted seawater," said Hong Kong Dolphinwatch spokeswoman Janet Walker, who added it was the third such incident reported in April alone.

Fewer than 2,500 of the mammals survive in the Pearl River Delta, the body of water between Macau and Hong Kong, with the majority found in Chinese waters and the rest in Hong Kong.

Experts say their number has dropped significantly in the past few years due to overfishing, an increase in marine traffic, water pollution, habitat loss and coastal development.

Hung said proposals to build a third runway on reclaimed land at the Hong Kong international airport would place further strain on the dolphins' habitat.

Campaigning against such developments and lobbying boat companies to divert traffic away from dolphin-inhabited areas are some of the ways people can support the mammals, he said.

The Chinese white dolphins, a population of the Indo-Pacific humpback dolphin species, are listed as "near-threatened" by the International Union for Conservation of Nature.