Taiwan on Friday awarded Oscar-winning director Ang Lee a top medal of honour to recognise his achievement in the film industry after he garnered two best director Oscars. 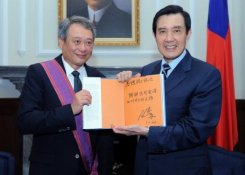 Ang Lee (left) with Taiwanese President Ma Ying-jeou in Taipei on Friday. Taiwan on Friday awarded Oscar-winning director Ang Lee a top medal of honour to recognise his achievement in the film industry after he garnered two best director Oscars.

President Ma Ying-jeou conferred the highest class of the "Order of the Brilliant Star" to Lee, making him the first person from the arts and entertainment sector to receive the honour.

"I win this medal because of my Oscar award, I share the Oscar with everyone and I share this honour with everyone. I hope Taiwan's arts and entertainment will get better and better," Lee said.

Lee, who is based in New York, was hailed as the "glory of Taiwan" after becoming the first Asian to win a best director Oscar for the gay cowboy drama "Brokeback Mountain" in 2007.

He won a second best director Oscar for the 3D adventure "Life of Pi" in February.

The Oscar came as a rare chance for Taiwan, living in the shadow of giant neighbour China, to bask in the global limelight after the small island found its way into Lee's acceptance speech.

"I (could) not make this movie without the help of Taiwan. We shot there," the 58-year-old said.

Egypt tries man over murder of student who refused advances

Abortion ban: one more obstacle faced by US servicewomen