After days under siege, President Barack Obama has sprung into action to confront three alleged scandals that Republicans are slamming as evidence of abuse of power and cover-ups. 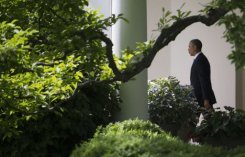 US President Barack Obama whistles as he departs the White House in Washington on May 13, 2013. Obama has launched a multipronged counterattack at Republicans who had painted a trio of alleged scandals as flagrant evidence of abuses of power and cover-ups.

In a multipronged attack on the Republicans, the president is acting amid incoming fire over the assault last year on a US mission in Libya, the targeting of conservative groups by tax officials and a Justice Department trawl of reporters' phone records.

On a day of high drama Wednesday, the White House released 100 pages of emails which it said debunked Republican charges that it had covered up the true circumstances of last year's Benghazi attack, which killed four Americans.

Then, Obama sacked the acting head of the Internal Revenue Service and pledged full cooperation with Congress over claims that the agency had unfairly investigated right-wing groups hostile to his White House.

And he also backed a "reporter shield" bill designed to strengthen the rights of journalists to protect sources, as a firestorm intensified over the government's seizure of Associated Press reporters' call logs.

The president sought to portray himself as decisive and with nothing to hide, as he sought to sweep away several days of political wobbles which left his administration under siege.

After meeting senior Treasury aides, Obama appeared in the East Room of the White House just in time for evening news programs to announce the acting head of the IRS, Steven Miller, was out.

"Given the controversy surrounding this audit, it's important to institute new leadership that can help restore confidence going forward," Obama said.

The president, who has dismissed Republican attempts to link him to the scandal at the independent agency, also pledged to work directly with Congress as it carries out oversight into the matter.

Obama said that abuses, revealed by a report by a government watchdog released on Tuesday, were "inexcusable."

The release of emails showed the development of the administration's narrative in the frantic days after the Benghazi attack on September 11 last year, which killed US ambassador Chris Stevens.

Many Republican lawmakers and pundits have alleged that Obama's aides engaged in a cover up to disguise the involvement of Islamic extremists in the attack and to head off damage to his re-election campaign.

The correspondence details a spirited debate between top US officials in several agencies about how to publicly describe the attack, and its causes, in talking points for members of Congress and the press.

But it appears to show that the CIA, and not senior White House or State Department officials, took the lead in developing the talking points and in omitting key information about possible action by extremists.

CIA Deputy Director Michael Morell is seen removing references to Al-Qaeda, and Libya-based extremists linked to the group, from the talking points, later used by US Ambassador to the United Nations Susan Rice on television.

The correspondence also appears to suggest that officials erred on the side of caution on the question of whether the attack was planned and carried out by extremists.

In one email, a CIA official warns his counterparts in other agencies that due to an ongoing criminal investigation, no public assessments should be made into who was responsible.

"The president has long supported media shield legislation in the Senate, during the 2008 campaign, and as president," spokesman Jay Carney said.

Democratic Senator Chuck Schumer, who reintroduced his shield proposal, said the bill would require prosecutors to prove to a judge that information sought would "prevent or mitigate an act of terrorism or harm to national security."

Obama's actions may improve his political position as he seeks to build traction for top second term initiatives like immigration reform and implementing his health care law, but Republicans are unlikely to be placated.

They sought to spin the IRS scandal into a narrative of abuse of power.

Republican Senator Marco Rubio said the IRS drama was symptomatic of a White House obsessed with political campaigning and wedded to a "culture of intimidation."