Del Toro branches out with Freudian drama at Cannes
World

Del Toro branches out with Freudian drama at Cannes 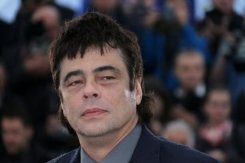 Puerto Rican actor Benicio Del Toro poses during a photocall for the film "Jimmy P. Psychotherapy of a Plains Indian" presented in Competition at the 66th edition of the Cannes Film Festival in Cannes, on May 18, 2013.

The Puerto Rico-born Del Toro adopts the haunted gaze and staccato dialect of Jimmy Picard, a Blackfoot Indian plagued by his past in what reviewers called a stand-out performance.

The picture by French director Arnaud Desplechin, presenting his fifth film in the , is based on the 1951 book "Reality and Dream" by anthropologist and Freudian psychoanalyst Georges Devereux, played in the film by Mathieu Amalric ("Munich").

Jimmy returns from the fighting in France to his sister's Montana ranch with a brain trauma from a skull fracture and complains of crippling headaches and recurring nightmares.

But when he is finally examined at Winter Hospital for veterans in Topeka, Kansas in 1948, the doctors say his injuries have healed and can find no physical explanation for his ailments.

Realising the problem may be psychological, the hospital's director notes that his white doctors have little understanding of the inner lives of American Indians.

Enter Devereux, a Hungarian Jew who has arrived in the US by way of Paris and done extensive research on Native Americans while training in psychotherapy.

The two fish out of water in the American Midwest strike up an unlikely friendship and reviewers called their bond as played by Del Toro and Amalric a highlight of the film.

Desplechin renders many of Jimmy's nightmares on screen as vivid waking dreams as they root out the childhood catastrophes and injuries of adulthood behind his suffering.

Del Toro, who captured an Academy Award for his role in "Traffic" in 2001 and won Cannes' best actor prize in 2008 for "Che", said he was attracted to the one-of-a-kind story.

"I read a lot of scripts -- it was so original that it popped up, it popped up, I don't know how else to explain it," he told reporters. "It (glowed) in the dark."

He said the European telling of a quintessentially American tale was also a strong draw.

"There's a big story there that is still unresolved and so you have to go from that approach, knowing the history of the Native Americans. That's fundamental to understand the character," he said.

Amalric said he underwent analysis himself to prepare for the part.

"It's a role like deep-sea diving and you meet all these eels and beautiful fish as you go deeper," he said.

Misty Upham, a native Blackfoot who plays Jimmy's first love Jane, said she believed the film's cast members were the first Native Americans to appear in competition in Cannes.

She said it took the medical profession a long time to catch up to the needs of America's indigenous population.

"We're a very spiritual people so what somebody else would call delusional, to us it's normal. So that's why they have to create a new way to understand what is going on in their minds without confusing the spirituality."

And industry bible Variety said the film featured Del Toro and Amalric "both working at the top of their craft (in) this demanding but highly absorbing closeup on the analyst/analysand relationship".

"Jimmy P." is one of 20 films vying for the festival's coveted Palme d'Or top prize, to be awarded on May 26.