Twenty-year-old barefoot singer Emmelie de Forest was the toast of Denmark Sunday after winning this year's Eurovision Song Contest in the Swedish city of Malmo. 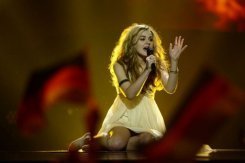 Denmark's Emmelie de Forest performs during the final of the 2013 Eurovision Song Contest in Malmo, Sweden, on May 18, 2013. Denmark's song "Only Teardrops" won the contest.

Her song, "Only Teardrops" confirmed its status as the bookmakers' favourite to register a comfortable win at Saturday night's finals, scoring 281 points at a glittering ceremony watched by millions of viewers.

Azerbaijan was the runner-up on 234 points, followed by Ukraine with 214 points.

"Denmark's darling was the big favourite and she met all expectations," public broadcaster DR wrote on its website.

Broadsheet Politiken chimed in too, noting that "Only Teardrops" was "the best song in Europe."

Denmark last won the contest in 2000 with "Fly on the wings of love" by Olsen Brothers, also in Sweden.

There was no shortage of Danish support in the Malmo Arena, located just minutes away from Sweden's southern neighbour across the eight-kilometre (five-mile) Oeresund bridge.

"I believed in the song, but the exciting thing about Eurovision is that you never know what's going to happen," de Forest told reporters after the competition. In the past the contest has produced surprise winners, such as the monster-mask clad Finnish rockers Lordi in 2006.

This time however, 20-year-old Danish singer confirmed her status as odds-on favourite, performing the winning entry barefoot -- her trademark since she began performing in her early teens -- against a flaming backdrop.

Although it was never a serious threat to de Forest's dramatic pop number about the state of the world, Azerbaijan earned top marks from several countries, propelling Farid Mammadov to second place.

Mammadov's emotional ballad "Hold me" was one of several eye-catching performances during the evening, the singer's moves mirrored by a dancer inside a glass cage.

Ukrainian entry "Gravity" had drawn media attention after it became clear that singer Zlata Ognevich would be carried on stage by a 2.34-metre (7 feet 8 inches) tall "giant" meant to symbolise her inner strength.

Crisis-stricken Greece made a strong showing in early voting but soon fell back, ending in sixth place, calming fears it would have to host the costly event next year.

The country had initially ruled out taking part this year because of the costs involved, but reversed its decision after a private broadcaster stepped in to finance the production of the country's national final.

Their song, "Alcohol Is Free", by Koza Mostra and Agathon Iakovidis, described Greece's suffering during the economic crisis.

Sweden had pledged to scale back the spectacular music fest after costs soared in recent years, vowing to stage a sparkling show for a fraction of what last year's host Azerbaijan spent.

Despite that, the largest Nordic nation opened Saturday's show with pageantry fit for an Olympic ceremony.

During the evening there were several references to the Swedish supergroup, which won the Eurovision in 1974 with "Waterloo" -- including a rendition of their hit "The winner takes it all" by Swedish singer Sarah Dawn Finer.

Hostess Petre Mede wore a pink dress by Jean-Paul Gaultier as she welcomed 11,000 fans -- including the French designer -- to the Malmo Arena.

With an estimated 125 million viewers, Eurovision is a bigger broadcasting event than American football's Super Bowl.