Syrian troops and their Hezbollah allies tightened the noose on the strategic town of Qusayr on Friday, as the rebels said hundreds of fighters had broken through army lines to join the battle. 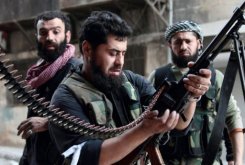 Image grab taken on May 30, 2013 from Hezbollah's al-Manar TV shows Syrian President Bashar al-Assad as he speaks during an interview in Damascus. Syrian troops and their Hezbollah allies tightened the noose on the last rebel-held parts of the strategic central town of Qusayr on Friday, after Assad said he was "very confident" of victory.

President Bashar al-Assad, meanwhile, said he was "very confident" of victory in Syria's conflict and threatened Israel with retaliation for any attack, in an interview aired late on Thursday.

In Istanbul, the deeply divided opposition announced agreement on expanding its membership to include more representatives of fighters and activists on the ground following accusations it was out of touch.

But despite extending its talks for five days longer than scheduled, the National Coalition put off until June electing a new leader and the formation of an interim rebel government.

Assad, whose forces are battling alongside fighters of Lebanon's Shiite movement Hezbollah to recapture Qusayr, said his regime would defeat the revolt which has raged since March 2011.

"There is a world war being waged against Syria and the policy of (anti-Israeli) resistance... (but) we are very confident of victory," he told Hezbollah's Al-Manar television.

Syrian state television said troops and Hezbollah fighters had captured the Arjun district in northern Qusayr on Thursday, leaving rebels holed up in the town little chance to escape.

Qusayr controls supply routes vital to both sides and access between Damascus and the Mediterranean.

The Syrian opposition said Friday that hundreds of rebel reinforcements, most close to the Muslim Brotherhood, have reached the town to try to repel the army's assault.

"Around 1,000 fighters from across Syria" have penetrated the rebel stronghold near the Lebanese border, the National Coalition's interim leader George Sabra told reporters in Istanbul.

"Hundreds" of rebels have broken through army lines near the village of Shamsinn, northeast of Qusayr, after losing 11 fighters, according to Rami Abdel Rahman, head of the Syrian Observatory for Human Rights.

The Coalition has appealed for the rescue of 1,000 civilians wounded in Qusayr, which Assad's forces have been trying to seize back in an all-out offensive since May 19.

Lebanese Prime Minister Tamman Salam, meanwhile, said his country should stay out of the Syrian conflict, in an interview published in Friday's edition of French daily Le Figaro.

"We must at all price preserve national unity," he said. "And obviously, Hezbollah's military involvement is not helping matters."

Assad threatened Israel with renewed fighting on the Golan Heights where a UN-patrolled armistice line has separated the two armies since Israel captured much of the strategic plateau in the 1967 Middle East war.

"There is clear popular pressure to open a new front of resistance in the Golan," he said, echoing a call from Hezbollah's leader Hassan Nasrallah.

"There are several factors, including repeated Israeli aggression," he added of reported Israeli air strikes on Syria.

"We have informed all the parties who have contacted us that we will respond to any Israeli aggression next time."

There was no immediate comment from Israel, which has said it does not want to provoke a military "escalation" with Syria, but will not allow it to transfer strategic arms to groups like Hezbollah.

Assad appeared to imply in the interview that Russia had already delivered some of the promised S-300 missiles that have sparked particular concern in Israel.

"All the agreements with Russia will be honoured and some already have been recently," he said.

But Russia's Vedomosti and Kommersant newspapers said Moscow may not deliver the missile systems to Damascus this year and rejected claims they had already arrived.

Washington warned that any such weapon deliveries from Moscow would only prolong the conflict, which activists say has killed more than 94,000 people.

Moscow said earlier this week that it would honour the contract to deliver the S-300s, saying the missiles were a "stabilising factor" which could act as a deterrent against foreign intervention in Syria.

The EU on Friday formally waived the arms embargo against rebels, leaving member states free from June 1 to decide at their own discretion whether to supply carefully vetted weapons to the opposition.

But there was a joint commitment to refrain from supplying weapons "at this stage" for fear of endangering a US-Russian initiative for a peace conference in Geneva, with a review of this set "before August 1".

The Observatory, meanwhile, reported that Syrian troops had killed three Westerners, including a US woman and a British man, both Muslims, near the border with Turkey on Wednesday.

"They were shot dead during an ambush in the Idlib region and the army found them with maps of military positions," said the monitoring group's director, Abdel Rahman.