Voters in Bhutan braved heavy rain and treacherous mountain paths to cast their ballots on Friday as the "land of the thunder dragon" began electing a government for only the second time. 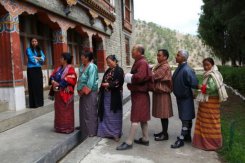 Women stand in line outside a polling station in Paro, Bhutan on May 31, 2013. Voters in Bhutan braved rain and treacherous mountain paths to cast their ballots on Friday as the "land of the thunder dragon" began electing a government for only the second time.

Wearing traditional dress and sheltering under umbrellas, Bhutanese queued patiently at polling stations in the isolated Himalayan nation in the first round of voting to determine the lower house of parliament.

The centre-right Druk Phuensum Tshogpa (DPT) party, which has governed Bhutan for its first five years of democracy, beat the three other parties contesting with a 45 percent share of the vote, officials said late Friday.

It will now go through to a final round on July 13 against the second-place People's Democratic Party, and the winners of that vote will form the next government.

Sherab Zangpo, a spokesman for the Election Commission of Bhutan, said the polling day was "very smooth" with "no complaints", but a turnout of just 55 percent suggested monsoon conditions had discouraged some from voting.

While the electorate comprises fewer than 400,000 people, casting votes is a huge logistical challenge across the rugged country, where democracy was introduced in 2008 after Bhutan's "dragon kings" ceded absolute power.

In the run up to the poll, officials trekked for up to seven days to reach voters in the most remote corners of the country, which is wedged between Asian giants India and China.

Armed with satellite phones to send in results, they battled heavy rains and slippery leech-infested trails to ensure that even isolated yak-owning nomads could cast their vote, the national Kuensel newspaper reported.

"From our side we did everything we could, but because of the weather there were roadblocks in the east," said Zangpo.

Conditions were less extreme in Dopshari village, about an hour-and-a-half drive from the capital Thimphu, where men in the national "gho" robe and women the "kira" dress began queueing up before the polls opened, some of them chewing betel nut to pass the time.

"There are so many pledges in their (politicians') manifestos but basically what we expect is a government that can bring about happiness to the people, and at the same time economic development," said Chimi Dorji, 35, as he waited.

"Because without economic prosperity there can't be happiness," he added.

Bhutan is the only country in the world to pursue "Gross National Happiness", a development model that measures the mental as well as material well-being of citizens.

Other policies that have set the country apart include banning television until 1999, keeping out mass tourism to shield its Buddhist culture and aiming to make its farming 100 percent organic.

The incumbent DPT party, which stormed to power in 2008, is expected to meet with victory again in July thanks to its popularity with rural communities, which make up about 70 percent of the population.

In the past five years they have seen hugely improved access to roads, electricity and mobile phone networks. But many educated, urban voters are less impressed with the government's work, said political analyst Kencho Wangdi.

Their concerns include a string of corruption scandals, a lack of new jobs, a weak private sector and a rupee liquidity crunch.

Bhutan is heavily dependent on its neighbour India for aid, investment and imports, and too much demand caused stocks of the Indian rupee to run out last year. Bank loans and imports of cars and luxury goods are still banned in Bhutan as a result.

Despite urban people's frustrations, they appear to hold less sway over rural voters than they did in 2008 when the country somewhat reluctantly embraced democracy on the command of the revered monarch, Wangdi said.

"Now after five years... the sense is that they can make up their own mind. They know a fair amount about what democracy is and who to vote for, and they're saying that they will vote based on informed choices."

Ahead of his turn in the polling booth in Dopshari village, 30-year-old Tshewang Dorji said the first five years of democratic rule had been "very fruitful" for Bhutan.

"I think it's a very well-established foundation for democracy and I think the current government has done a very good job in making people happy."