The man who leaked the secrets to WikiLeaks
World

The man who leaked the secrets to WikiLeaks

FORT MEADE, Maryland - Army Private First Class (Pfc) Bradley Manning went on trial Monday, more than three years after he was arrested in Iraq and charged in the biggest leak of classified information in US history.

Manning's supporters hail him as a whistle-blowing hero and a political prisoner. Others view him as a traitor.

Manning has admitted to sending troves of material to the anti-secrecy website WikiLeaks and pleaded guilty to charges that would send him to prison for up to 20 years. The US military and the Obama administration weren't satisfied, though, and pursued a charge of aiding the enemy, which carries a potential sentence of life in prison without parole. 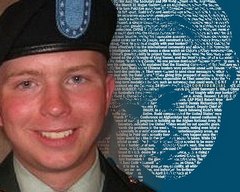 A photo of Bradley Manning appears beside a stylised image of WikiLeaks founder Julian Assange - who published the secrets that Manning stole.(File photo)

The trial on that most serious charge and 20 other offences began Monday for the 25-year-old former intelligence analyst from Oklahoma.

It's the most high-profile case for an administration that has come under criticism for its crackdown on leakers. The six prosecutions since Obama took office is more than in all other presidencies combined.

Manning's case is part of a network of developments, especially around Wikileaks, which published all the papers that Manning stole.

The Wikileaks founder Julian Assange, an Australian, has been holed up in the embassy of Ecuador, fleeing a sexual assault case which has nothing to do with Wikileaks or Manning - but which has shone a spotlight on both.

(The Reuters news agency reported on Monday that Britain is considering holding talks with Ecuador over the future of Assange.

(The Wikleaks founder took refuge in Ecuador's embassy in London after he lost an extradition case to Sweden, where he is wanted for questioning over sex assault and rape allegations.

(Ecuador's foreign minister Ricardo Patino will visit Britain later this month, and has proposed trying to negotiate a solution to the Assange flight. Assange claims he is fleeing possible charges in the Manning case, but no country has issued any criminal charges against Assange.)

Manning chose to have his court martial heard by a judge instead of a jury. It is expected to run all summer.

In February, Manning told military judge Army Col. Denise Lind that he leaked the material to expose the American military's "bloodlust" and disregard for human life in Iraq and Afghanistan. He said he did not believe the information would harm the US and he wanted to start a debate on the role of the military and foreign policy.

The judge accepted his guilty plea to reduced charges for about half of the alleged offences, but prosecutors did not and moved forward with a court-martial on charges including violations of the Espionage Act and the Computer Fraud and Abuse Act.

US officials have said the more than 700,000 Iraq and Afghanistan battlefield reports and State Department cables sent to WikiLeaks endangered lives and national security.

The material WikiLeaks began publishing in 2010 documented complaints of Iraqi detainee abuses; a US tally of civilian deaths in Iraq; and America's weak support for the government of Tunisia - a disclosure Manning supporters said encouraged the popular uprising that ousted the Tunisian president in 2011 and helped trigger the Middle Eastern pro-democracy uprisings known as the Arab Spring.

Last month, the government agreed to accept Manning's guilty plea for one lesser version of one count, involving a single diplomatic cable summarising US embassy discussions with Icelandic officials about the country's financial troubles.

The release of the cables and video embarrassed the US and its allies. The Obama administration has said it threatened valuable military and diplomatic sources and strained America's relations with other governments, but the specific amount of damage hasn't been publicly revealed and probably won't be during the trial.

Lind ruled the extent of any damage is irrelevant. Defence attorney David Coombs contends it was minimal.

Much of the evidence is classified, which means large portions of the trial are likely to be closed to reporters and the public. The judge tested alternatives to closing the courtroom, such as using code words and unclassified summaries, but Lind said it didn't work.

US labor board challenges Google moves against activist employees