Three somewhat distant relatives of Spain's 75-year-old King Juan Carlos have been placed under investigation by a judge on suspicion of links to a Chinese mafia money laundering scandal, a judicial source said. 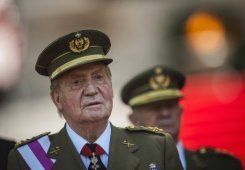 Spain's King Juan Carlos is pictured on June 1, 2013, in Madrid. Three distant relatives of the king have been placed under investigation by a judge on suspicion of links to a Chinese mafia money laundering scandal, a judicial source said.

The case has made few headlines in Spain, where many people struggle to keep up with the developments in myriad corruption scandals including one swirling around the king's son-in-law Inaki Urdangarin and another around the financing of the ruling Popular Party.

In the latest case, 13 people, who are being probed on suspicion of money laundering and an offence against the Public Treasury, started appearing before a judge at the National Court in Madrid on Monday, said the judicial source, speaking on condition of anonymity.

The three relatives of the king are among the 13, said a source at the prosecutors' office, who also declined to be identified.

The three royal relations are Maria Margarita and Maria Inmaculada Borbon Dos Sicilias Lubomiska, elderly cousins of the king's late mother, both of whom have had their appearances suspended for medical reasons, as well as Maria Inmaculada's daughter Maria Ilia Garcia de Saez, who is expected to appear before the judge Tuesday, the prosecutorial source said.

All three are suspected of receiving money from the Chinese mafia ring.

Gao Ping, a Chinese businessman and art gallery owner, is accused of running a network that laundered hundreds of millions of euros in Spain.

He was arrested along with 80 others in October in a Spanish police operation dubbed Emperor that mobilised 500 officers and led to the seizure of 10 million euros in cash, 200 vehicles, firearms, jewels and works of art.

Gao Ping was freed November 29 along with 11 others as a result of a procedural problem related to their detention before being sent back to jail in April by a judge.

The embattled King Juan Carlos has been embarrassed by a corruption scandal implicating his youngest daughter Cristina, whose tax affairs are being probed by a judge, and her husband Inaki Urdangarin, who has been under investigation since late 2011 for alleged embezzlement.

He also issued a public apology last year for going on a luxury elephant-hunting trip to Botswana as Spaniards struggled in a recession.