On June 16, 1963, Valentina Tereshkova became the first woman to fly into space in a major propaganda coup for the Soviet Union. 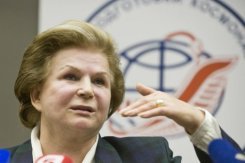 Valentina Tereshkova speaks during a press conference in Star City outside Moscow, on June 7, 2013. On June 16, 1963, Tereshkova became the first woman to fly into space in a scientific feat that was a major propaganda coup for the Soviet Union.

Two years after Yuri Gagarin's historic first manned flight, Tereshkova blasted off in a Vostok-6 spaceship, becoming a national heroine at the age of 26.

She remains the only woman ever to have made a solo space flight.

In April 1962, officials narrowed down the candidates for the flight to five. In a top-secret process, they picked two engineers, one school teacher, one typist and one factory worker who had performed 90 parachute jumps: this was Tereshkova.

After seven months of intensive training, they chose Tereshkova, who grew up in a peasant family and was a Communist Youth (Komsomol) leader at her textile factory in the historic city of Yaroslavl, around 280 kilometres (174 miles) from Moscow.

Tereshkova was not allowed to confide even in family members, who only learnt of her exploit when Moscow announced it to the entire world.

When she blasted off from the Baikonur cosmodrome in Kazakhstan, another Soviet spaceship, Vostok-5, was already in orbit for two days, piloted by cosmonaut Valery Bykovsky.

During her three-day mission, Tereshkova circled Earth 48 times. On the first day, she communicated with Bykovsky and even sang him songs. Their communication was then interrupted as the two spaceships moved further away from each other.

Her flight experienced numerous glitches which were only made public after the fall of the Soviet Union.

"A problem appeared on the first day of the flight," Tereshkova said at a press conference in Star City, home to a cosmonaut training centre, earlier this month.

"Due to a technical error, the spaceship was programmed not for a landing but for taking the ship into a higher orbit," she said, meaning that the ship was heading further and further from Earth.

The error was corrected, but chief constructor Sergei Korolyov asked Tereshkova not to tell anyone.

Tereshkova wrote in her official report that her spacesuit hurt her leg and that her helmet weighed down her shoulders and scratched her head. She also said she vomited during the flight.

This information was also kept under wraps in order not to spoil the triumph of the first woman in space.

Tereshkova's landing also prompted concerns at mission control. She had difficulty in guiding her spaceship and her communications were cut off just before descent began, Soviet general Nikolai Kamanin, who was in charge of the space sector at the time, revealed later.

Tereshkova catapulted out of her space capsule -- as was then standard procedure -- and parachuted down to land in Altai in southern Siberia.

But mission control did not know Tereshkova's location for two hours after she landed, spaceship constructor Boris Chertok admitted in his memoirs.

Rescuers finally found her tens of kilometres away from the expected spot.

Tereshkova has said in interviews that during the landing her nose smashed against the visor of her helmet and she had to cover up the bruise with make-up at official ceremonies.

After her accomplishment, the second woman to go into space in 1982 was also from the Soviet Union, Svetlana Savitskaya. In 1983 the first American woman, Sally Ride, followed.

Since then more than 40 women from the US have gone into space, but just one other Russian, Yelena Kondakova, in 1994 and 1997.

Doctor Yelena Dobrokvashina trained for 14 years for space and was set to take part in an all-female mission with Savitskaya that was eventually dropped.

"It was probably because of male chauvinism," Dobrokvashina, now employed at the Institute of Medical and Biological Problems that works with cosmonauts, told AFP.

"When we were training at Star City, the space industry chiefs were divided: some supported the all-female project, while others could not stand the idea."

Now another would-be cosmonaut, Yelena Serova, 36, is training for a six-month mission to the International Space Station next year.

Speaking to AFP, she called Tereshkova "a heroic personality, the woman of the century".

"If all goes well and my flight goes ahead, that will be a signal to encourage more and more women to try their strength in space," she said.

In 1964 she gave birth to a daughter Yelena. The couple later divorced and Tereshkova remarried.

After occupying various honorific roles during the Soviet period, at 76 Tereshkova is a lawmaker for the ruling United Russia party.

But the adventurous spirit remains: she said this month that she would be "ready" to fly to Mars, even if it were a one-way trip.