Growing up in Trinidad and Tobago, Makeba Gabriel imagined living a life of Carnival limbo dancing. Running away with the circus never crossed her mind. 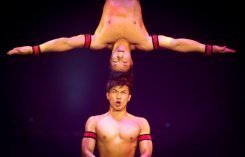 Artists perform during a show at the UniverSoul Circus at National Harbor, Maryland on June 16, 2013. UniverSoul is the only African-American owned circus founded in Atlanta by concert and theater promoter, Cedric Walker.

"That was my dream, to be a dancer," said the 31-year-old star of the UniverSoul circus who thinks nothing of bending over backwards to crawl under five rows of open flames 10 inches (25 centimeters) off the ground.

"It wasn't to be with a circus. But it just so happens that I've been with the circus for seven years, and it is a pleasure. It's really fun and enjoyable," she said.

UniverSoul is among dozens of circuses that criss-cross the United States every summer, sustaining a form of live entertainment that dates back to the late 18th century.

"If you live anywhere in the United States within 30 or 40 miles of any primary or secondary market, you will find a circus," circus historian Rodney Huey told AFP.

The grandest and most historic is the Ringling Brothers and Barnum and Bailey Circus, the self-styled "greatest show on Earth," while the Canadian-based Cirque de Soleil enjoys a strong following.

UniverSoul is a smaller one-ring affair, but its heritage makes it unique.

Founded in 1994 by pioneering rap concert producer Cedric Walker, whose hip-hop tours helped to make Run-D.M.C. and Salt-n-Pepa household names, it is the only modern circus with African-American roots.

"It was an opportunity whose time had come," Walker told AFP outside the UniverSoul big top on a breezy plateau overlooking the Potomac River outside Washington, where the circus is performing this month.

"There wasn't a family attraction I saw that reflected the urban lifestyle, the energy, the music" of contemporary African-American culture, he said.

"It was pretty exciting and a lot of people did turn on to the idea of an urban show that was kind of funky, that had the fashion and the style and the cross-culture thing."

UniverSoul has two units on the road hitting about 35 cities this year, with the one at National Harbor employing a cast of 150 entertainers and backstage crew, not to mention a menagerie of elephants, tigers and horses.

While the 2,300-member audience at one recent Sunday show was predominantly African-American, drawn from Washington and its sprawling suburbs, the cast was truly international.

Johannesburg native Daniel "Lucky" Malatsi, now 24, was nine years old, playing the Victoria and Alfred Waterfront in Cape Town, when he joined UniverSoul. Today he's one of the co-hosts as well as a dancer and acrobat.

"When I first started off I was an acrobat and a contortionist, and I've done numerous things ever since," he said.

"That's one of the great things with the UniverSoul circus. It taught me to evolve and not always be one thing."

He travels with his wife, a former circus showgirl, and their three-year-old son, who he proudly reveals is "on his way to becoming an acrobat."

"It's a fun life, traveling from city to city," he said. "I have my family with me, so I have everything I need."

His advice to those who relish running away with the circus: "Get an education. Like me, I had to finish my schooling even when I was on tour... Then if you have talent, come on and join the circus."

Unmarried and childless, Gabriel regards her troupe -- whose Caribbean Carnival acts blend wildly colorful costumes with towering stilt dancers and heart-stopping limbo feats -- as her family for most of the year.

She makes limbo dancing sound so easy: "It's all in the pelvis area. You must have a strong pelvis, a good pair of knees, and you're good to go. It's a piece of cake."

Their crowd-pleasing signature stunt is a "head-to-head" balancing act, with one sibling inverted atop the head of the other.

Young veterans of the European circus circuit, and award-winners at festivals in Italy and Cuba, UniverSoul is the duo's introduction to life on the American road.

"I think we will have a long time to stay here," said Giang Quoc Nghiep in halting English, his smiling brother nodding in agreement. "This is a good country. Very nice. I like."

Walker considers circus performers "the most under-rated artists in the world."

"They do a lot. They give a lot. The circus is a reflection of life... I've been with a lot of singers and rappers, but I've come to be very fond of these artists for what they're made of and where they come from."