A suicide attack on Friday killed 15 people and wounded more than 25 others at a Shiite Muslim mosque and religious seminary on the edge of Pakistan's northwestern city of Peshawar, officials said. 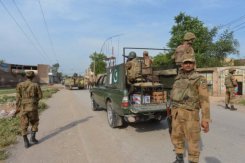 The bomber struck in the largely Shiite area of Gulshan Colony on the outskirts of the city, which abuts Taliban and Al-Qaeda-linked strongholds in the northwestern tribal belt on the Afghan border.

The attack came just days after US officials said they hoped to open peace talks with Afghan Taliban in Doha, capital of the Gulf state of Qatar.

"It was a suicide attack in which 15 people were killed and more than 25 others were wounded," senior police official Shafi Ullah told AFP at the scene.

"The suicide bomber, who was on foot, first opened fire at police guards who were deployed outside the mosque, then entered the prayer hall where he blew himself up amid worshippers just before the start of prayers," he added.

The force of the blast punched holes in the walls and roof of the prayer hall, the floor of which was littered with bloodied pieces of human flesh, dead bodies, Islamic books and prayer caps, an AFP reporter said.

Prayer leader Aamir Shakiri said he was just about to join the worshippers when he heard gun shots, followed by a "deafening blast".

"Thick mosque engulfed the entire mosque and it was difficult to see anything but I was able to see dead bodies and injured people shouting for help," he said.

Police official Imran Shahid told AFP that at least three suicide bombers had originally intended to carry out the attack.

"Two of them fled while one of their accomplices managed to enter the prayer hall and blow himself up," he said.

There was no immediate claim of responsibility, but attacks waged by Sunni Muslim extremists against Pakistan's minority Shiite community are on the rise.

Ali Iqbal Qazilbash, a 24-year-old Peshawar University student, told AFP he rushed out of his uncle's home when he heard the explosion.

"It was really horrifying to see blood soaked and mutilated bodies lying on the floor of the hall," Qazilbash said.

"I immediately started knocking on doors in the neighbourhood and calling people for help."

Shiites account for 20 percent of the 180 million population in the nuclear-armed state.

Extremist Sunni militant faction Lashkar-e-Jhangvi claimed responsibility for a series of attacks on Shiites in the southwestern city of Quetta that killed at least 25 people on June 15.

In Pakistan's business capital of Karachi, gunmen shot dead a provincial lawmaker, his son and a passer-by outside a mosque.

Sajid Qureshi, in his early 50s, and his 25-year-old son were targeted after Friday prayers in the congested Nazim Abad neighbourhood.

Qureshi was a member of the secular Muttahida Qaumi Movement (MQM), the most powerful political party in Karachi now considering whether to join the government in southern Sindh province.

"He died on the spot, while his son and the third victim died at hospital," police official Amir Farooqi said.

The Tehreek-e-Taliban Pakistan (TTP) group claimed responsibility for the killing, threatening to carry out more such attacks against the party.

"We claim responsibility for the killing of MQM member," Taliban spokesman Ehsanullah Ehsan told AFP by telephone from an undisclosed location but denied the group's involvement in the Peshawar bombing.

Karachi, a city of 18 million people, contributes 42 percent of Pakistan's GDP but is rife with murder and kidnappings and has been plagued for years by ethnic, sectarian and political violence.

Officials also said two members of a pro-government militia were killed when militants armed with guns and rockets attacked their homes in the northwestern tribal district of Bajaur on the Afghan border.

Writing in English-language newspaper The News on Friday, analyst Ayaz Amir reflected on the repercussions for Pakistan of prospective peace talks between the Afghan Taliban and the United States.

He said talks would make it almost impossible for Pakistan to open a new military front against domestic insurgents in the northwest.

He said the "significance of the Taliban gaining, at long last, virtual American diplomatic recognition" would be a triumph for Afghan Taliban leader Mullah Omar but a "problem" for Pakistan.

"Because Mullah Omar's resurgent emirate, waiting patiently for the Americans to depart, now extends, like a dagger, into Pakistan - in the form of (Pakistani Taliban leader) Hakimullah (Mehsud)'s Waziristan."

A US-led NATO combat mission numbering nearly 100,000 foreign soldiers in Afghanistan is due to withdraw next year, leaving Afghan government forces in charge of countering any persistent Taliban violence.