Former US spy Edward Snowden on Sunday arrived in Russia from Hong Kong, reportedly on his way to Venezuela, escaping the clutches of US justice after leaking sensational details of cyber-espionage by Washington. 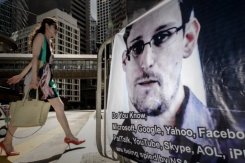 A woman walks past a banner displayed in support of former US spy Edward Snowden in Hong Kong on June 18, 2013. Snowden on Sunday arrived in Russia from Hong Kong, reportedly on his way to Venezuela, escaping the clutches of US justice after leaking sensational details of cyber-espionage by Washington.

Snowden, the target of a US arrest warrant issued Friday after he blew the lid on massive secret surveillance programmes, arrived in Moscow on a direct flight operated by Russian flag carrier Aeroflot.

The Hong Kong government said earlier it had "no legal basis" to prevent Snowden leaving because the US government had failed to provide enough information to justify its provisional arrest warrant for the former National Security Agency (NSA) contractor.

Snowden, 30, landed at Sheremetyevo airport in the north of Moscow at 5:05 pm (1305 GMT) but there was no immediate official confirmation of where he would head next, an AFP correspondent at the airport said.

Russian official media quoted airport officials as saying that Snowden was on the plane.

The website of WikiLeaks, which says it aided his exit, said Snowden was on his way to asylum in a "democratic nation". Russian media reports cited sources within Aeroflot as saying he would fly to Cuba on Monday and then travel on to the Venezuelan capital Caracas.

Snowden did not emerge into the terminal public area along with other passengers on the flight and his fellow travellers raised the possibility he may have been whisked away in a car directly from the airport tarmac.

"They were getting luggage straight from the plane into the car. It seemed a little strange. I saw three pieces of luggage," Aeroflot passenger Jason Stephens from the United States told AFP.

A source at Sheremetyevo told Interfax that "transit passenger" Snowden was still at the airport. "His next flight is to Cuba, he is on the territory of the airport complex where he has to be."

AFP correspondents also said they saw a diplomatic car at VIP arrivals with the flag of Ecuador, the country whose embassy in London is hosting WikiLeaks founder Julian Assange to prevent his extradition to Sweden.

A source quoted by RT television said Snowden was examined by an Ecuadorian embassy doctor at Moscow airport upon his arrival.

WikiLeaks claimed credit for helping to arrange asylum for the man behind one of the most significant security breaches in US history.

"Mr Edward Snowden, the American whistleblower who exposed evidence of a global surveillance regime conducted by US and UK intelligence agencies, has left Hong Kong legally," WikiLeaks said in a statement.

"He is bound for a democratic nation via a safe route for the purposes of asylum, and is being escorted by diplomats and legal advisors from WikiLeaks," it said without revealing his final destination.

Wikileaks confirmed that Snowden was accompanied by a British citizen named Sarah Harrison, whom it described as a "journalist, and legal researcher" working with the WikiLeaks legal team.

In the latest revelations in the South China Morning Post, Snowden said the NSA was hacking Chinese mobile phone companies to gather data from millions of text messages.

He said US spies have also hacked the prestigious Tsinghua University in Beijing -- home to one of six "network backbones" that route all of mainland China's Internet traffic -- and the Hong Kong headquarters of Pacnet, which operates one of the Asia-Pacific region's largest fibre-optic networks.

Snowden abandoned his high-paying job in Hawaii and went to Hong Kong on May 20 to begin issuing a series of leaks on NSA eavesdropping of phones and computer systems, triggering concern from governments around the world.

Obama's administration has insisted on the legality of the vast surveillance programme and said it has foiled a number of extremist plots.

Snowden's departure from Chinese territory could result in US retaliation against Hong Kong. But the affair is a shock to the Obama administration, which on Friday unveiled charges including theft and espionage against him.

White House National Security Advisor Tom Donilon had said on Saturday that the charges presented a "good case" for Hong Kong to extradite him and that "we expect them to comply with the treaty in this case".

But the government of Hong Kong, a special administrative region (SAR) under Chinese rule that has maintained its own British-derived legal system, said it had informed Washington of Snowden's exit after determining that the documents provided by the US government did not fully comply with Hong Kong legal requirements.

"As the HKSAR government has yet to have sufficient information to process the request for provisional warrant of arrest, there is no legal basis to restrict Mr Snowden from leaving Hong Kong," it said in a statement.

It also pressed Washington for answers "on earlier reports about the hacking of computer systems in Hong Kong by US government agencies".

Two of the charges were brought under the 1917 Espionage Act.