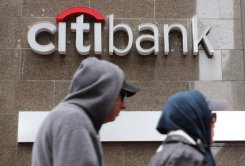 A preliminary investigation by the Commission showed that banks worked together to exclude exchanges from the derivatives market.

This was allegedly because they feared involvement by the exchanges would cut into their huge profits from over-the-counter trading.

Some aspects of derivatives trading have been blamed for exacerbating the financial crisis.

The EU's Competition Commissioner Joaquin Almunia said that the banks now had the chance to respond to the detailed accusations.

He said that they could face fines if the charges were confirmed once the investigation had been completed.

"If it is confirmed that banks collectively blocked exchanges from the derivatives market, the Commission could decide to impose sanctions," Almunia said at a press briefing.

Collusion between banks to prevent this type of trading would be "a serious breach of our competition rules", he said.

Almunia declined to give an estimate of the size of possible fines on the banks but he said the CDS market at the moment was worth about 10 trillion euros ($13 trillion).

The collapse of US investment bank Lehman Brothers in 2008 "showed how derivatives trading is able to destabilise the entire financial system," Almunia said.

The EU investigation began in 2011 and has focussed on claims that the Deutsche Boerse stock market and the Chicago Mercantile Exchange were excluded from the derivatives market between 2006 and 2009 when the crisis reached its peak.

It said the two exchanges decided to turn to the International Swaps and Derivatives Association (ISDA) and data service provider Markit to obtain the necessary licences but were turned down because the banks had prevented them from doing so.

Four other banks that had been involved in the investigation -- Commerzbank, Societe Generale, Credit Agricole and Wells Fargo -- have been excluded because of a lack of evidence.

In May, a US pension fund for Cleveland metal workers initiated legal proceedings against some of the banks identified by the European Commission saying it had suffered financial losses because of "an illegal cartel".

The fund said the number of victims of the alleged cartel could reach "tens of thousands", and claimed the derivatives market had been heavily distorted by those who controlled it.

The European Commission has worked to take on a stronger role in policing the financial markets in the wake of the global financial crisis and the eurozone sovereign debt crisis.

Last month it said it was preparing a set of proposals to tighten up oversight of key market benchmarks, especially of interest rates, after recent rigging scandals in London.

These could include moving LIBOR, a global interest rate indicator, from London to Paris where it would be supervised by the European Securities and Markets Authority.

Such a move would very likely anger the British government which jealously guards the City of London, home to one of the world's largest financial markets.

LIBOR, or London Interbank Offered Rate, is a flagship reference instrument used all over the world, affecting what banks, businesses and individuals pay to borrow money.

London's role has been undermined by revelations that major banks, among them Barclays, Royal Bank of Scotland and UBS, have manipulated LIBOR to their advantage, especially during the turmoil and aftermath of the 2008 crisis.

British regulators have laid out plans for a new system combining survey-based rates and objective data to replace the current system, hoping to head off EU efforts to take overall control of such a key financial market instrument.

A taxi driver wanted for the alleged detention and forcible rape of a woman in Bangk’s Bung Kum district has been arrested nearly three years later.