Rescuers battled to reach survivors from an earthquake in Indonesia's Aceh province that has killed at least 22 people, including several children who died when a mosque collapsed. 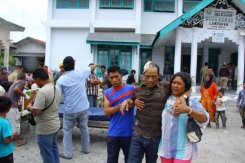 The injured are treated outside a hospital in Lampahan, Aceh, on July 2, 2013, after the area was hit by a strong earthquake. The quake, which struck at a shallow depth of 10 kilometres (six miles), sparked panic in the natural disaster-prone region where more than 170,000 people were killed by the quake-triggered tsunami of 2004.

More than 200 people were also injured in Aceh's mountainous interior when the strong 6.1-magnitude quake struck on Tuesday, flattening buildings and triggering landslides.

The quake, which struck at a shallow depth of 10 kilometres (six miles), sparked panic in the natural disaster-prone region where more than 170,000 people were killed by the quake-triggered tsunami of 2004.

In Blang Mancung village, Central Aceh district, at least six children were killed and 14 trapped when a mosque collapsed during a Koran reading session.

"I hope they can be found alive but the chances are very slim," Subhan Sahara, the head of the local disaster management agency, told AFP late Tuesday.

Military, police and local government officials were trying to reach affected areas on Wednesday by ground and in aircraft but some roads were blocked by landslips, the national disaster agency said. The agency dispatched a helicopter from neighbouring Riau province to assist in rescue efforts, while an air force plane was also deployed to assess the damage.

"So far 22 people died, 210 people were injured, and thousands of buildings and homes were damaged in the quake," disaster agency spokesman Sutopo Purwo Nugroho said.

The casualties were spread over the two worst-hit districts of Central Aceh and Bener Meriah, he said. Scores of people were being treated at hospitals across the region.

In Bener Meriah, about 300 people camped out overnight in open spaces, such as football fields, as the area was hit by strong aftershocks, Fauzi, an official from the local disaster agency, told AFP.

He said many were in desperate need of food.

"There were strong aftershocks last night and people didn't want to go back home, so they stayed in the open overnight, but we don't have enough tents," said the official, who like many Indonesians goes by one name.

"We have a power outage now and communications are unreliable," he added.

People ran outside in the provincial capital Banda Aceh as the quake - some 320 kilometres (200 miles) away -shook houses, and in Medan city to the south of the province on Sumatra island.

Aceh, on the northern tip of Sumatra, is regularly hit by quakes. The huge quake-triggered tsunami of 2004 not only killed tens of thousands in the province, but also many in countries around the Indian Ocean.

Five people died and seven were injured in Aceh in the quake and following aftershocks.

In September 2009 a major earthquake near Padang city on Sumatra killed more than 1,000 people.