European security experts are set to meet their US counterparts in Washington next week as European Union nations, incensed by reports of US snooping, link negotiations on a mega EU-US trade deal with talks on intelligence-swapping. 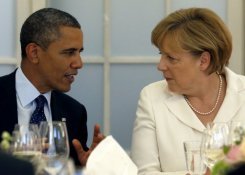 A rights activist takes part in a protest against the alleged violation of privacy by the US National Security Agency in Washington DC, July 4, 2013. European security experts are set to meet their US counterparts in Washington next week as European Union nations, incensed by reports of US snooping, link negotiations on a mega EU-US trade deal with talks on intelligence-swapping.

Italy and France meanwhile were the latest EU states to turn down an asylum request from ex US intelligence analyst Edward Snowden, after Poland, the Netherlands, Austria, Finland, Ireland and Spain refused to offer a safe haven.

Diplomatic sources told AFP that top security and intelligence experts from both sides of the Atlantic will meet Monday -- as EU and US trade experts also put their heads together -- under a deal worked out by the bloc's 28 ambassadors to the EU.

"The idea is to hold a first meeting as soon as July 8, which would help justify not delaying the first session of the TTIP" (The Transatlantic Trade and Investment Partnership), an EU diplomat said on condition of anonymity.

Talks on the world's biggest ever free trade deal that are to kick off Monday came under threat after explosive allegations of US spying on EU offices, with France notably demanding their postponement, but Germany keen to press ahead as planned.

EU Commission president Jose Manuel Barroso eventually offered a compromise Wednesday: the trade talks would open but run in tandem with working groups tasked with probing the extent of the US spying.

Britain however held up a deal, sources said, by objecting to the idea of an EU-US intelligence swap. The original proposal on the table was to set up two groups of experts -- one on intelligence gathering, the other on data privacy and oversight.

"Our British friends probably don't know what side of the table to sit on," quipped an EU diplomat.

Snooping claims by Snowden have cast a pall over the free trade deal that the EU says would add about 119 billion euros annually to the bloc's economy, and 95 billion euros for the United States -- giving a much-needed boost to Europe's stagnating economy.

In Strasbourg, the European Parliament demanded "immediate clarification" from Washington and warned of its "potential impact on trans-Atlantic relations".

But lawmakers rejected an amendment by left and far-left parliamentarians to call for the postponement of the trade negotiations.

US President Barack Obama spoke with German Chancellor Angela Merkel on Wednesday in a bid to limit the fallout from the spying scandal.

"The president assured the chancellor that the United States takes seriously the concerns of our European allies and partners," according to a readout of the telephone conversation released by Washington.

The trust Germans have in the United States has plunged amid the spying and surveillance claims, a poll showed Thursday.

Only 49 percent of survey respondents saw the US as a trustworthy partner, the survey said.

Thousands of activists across the United States took to the streets and the Internet to mark July 4 with protests against the National Security Agency's surveillance programs.

Near the White House in Washington, around 200-300 people gathered, some brandishing placards reading "Don't steal my rights to privacy!"

Ties between Washington and Brussels have been strained since Snowden, a former contractor with the National Security Agency (NSA), revealed that the US was systematically seizing vast amounts of Internet and telephone data around the world.

Reports in the Guardian and Der Spiegel in recent days then detailed widespread covert surveillance by the NSA of EU offices, including diplomatic missions in Washington and at the United Nations in New York, as well as at its Brussels headquarters.

The latter group could be made up of intelligence experts from the EU's six biggest nations, while the data privacy and oversight group would include experts from member states as well as from the EU executive, the European Commission.

The spying row widened on Wednesday after Bolivia accused France, Italy, Portugal and Spain of temporarily denying President Evo Morales's plane overflight rights over suspicions that Snowden was travelling with him.

Meanwhile the Le Monde newspaper on Thursday reported French secret services were intercepting communication on a massive scale and storing it on a supercomputer at the headquarters of the DGSE intelligence service.

The government has not responded to the allegations.

Snowden meanwhile is waiting for a country to give him safe haven.

The 30-year-old computer specialist arrived in Moscow from Hong Kong on June 23 in a bid to escape US efforts to have him extradited on espionage charges.

He has filed asylum requests with 21 countries.

Rohingya refugees in India's capital to be given flats, security

Jihadists spread from the Sahel to coastal West Africa