IMF chief Christine Lagarde on Sunday signalled that her organisation would be lowering slightly its global economic growth forecasts, which are set to released in the next few days. 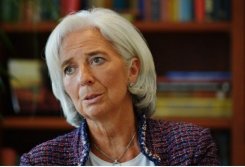 Christine Lagarde speaks in an interview with AFP at IMF Headquarters in Washington, DC last month. The IMF chief signalled on Sunday that her organisation would be lowering slightly its global economic growth forecasts, which are set to released in the next few days.

Lagarde noted that the International Monetary Fund, along with the World Bank, back in April said that the global economic recovery was advancing at mainly three different speeds, from an average 5.5 percent in emerging economies to 2.0 percent in advanced countries like the United States and Australia, to the essentially deadlocked economies of the eurozone.

"We therefore had a (global) growth forecast which was about 3.3 percent, but I am afraid when taking into account what we are currently seeing in the economies of the emerging countries in particular ... I am afraid that we are perhaps a little bit below" the previous forecast, Lagarde said at an economic meeting held in the southern French city of Aix-en-Provence.

Earlier this month the World Bank slashed its growth forecast for emerging economic superpower China to 7.7 percent from 8.4 percent, warning of a potential "sharp" slowdown triggered by a fall in investment.

That contributed to its global economic growth estimate in 2013 being cut to an annual rate of 2.2 percent from its January forecast of 2.4 percent.

Lagarde declined to give any figures saying they would be released by the IMF's chief economist in the next few days.

Deadly fighting between IS, Kurd forces in Syria

Dredgers spotted at Cambodian naval base