The Thai government and Muslim rebels have agreed to try to curb violence during Ramadan, a Malaysian official said Friday, marking a new step towards ending nearly a decade of conflict. 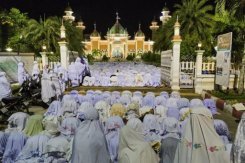 Thai Muslim women offer prayers at Pattani mosque during the month of Ramadan in Thailand's restive southern Pattani province on July 11, 2013. The Thai government and Muslim rebels have agreed to try to curb violence during Ramadan, a Malaysian official said Friday, marking a new step towards ending nearly a decade of conflict.

An insurgency in the Muslim-dominated region has claimed more than 5,700 lives since 2004 but talks between the Thai authorities and some rebel groups including the Barisan Revolusi Nasional (BRN) have brought tentative hopes of peace.

Malaysia is acting as a facilitator for the negotiations. But despite several rounds of talks since March, attacks in the region have occurred almost daily.

Mediator Ahmad Zamzamin Hashim said that both parties had "reached a common understanding to work towards a violence-free Ramadan".

Under the "Ramadan Peace Initiative", Thai security forces would avoid "aggressive actions" while the BRN would not engage in "armed attack, bombing and ambush" against Thai troops and the public, he said.

"This is a stepping stone to what we want to achieve in the future. If there are no incidents, we can see the light at the end of the tunnel. It will be a precedent, a stepping stone," he told reporters.

The deal is for a 40-day period from July 10 to August 18 and will cover the southern provinces of Yala, Pattani, Narathiwat and Songkhla, he said.

Under the plan, Thai authorities have removed a number of roadblocks and the military has withdrawn its personnel from some villages in a bid to ease tension.

Thailand's National Security Council chief and lead peace negotiator Paradorn Pattanatabut welcomed the rebels' pledge although he noted that some splinter groups were opposed to dialogue.

"But I'm convinced that the BRN will be able to curb violence," he told AFP in Bangkok. "In the past they never came out and made a clear announcement of their goal."

Despite four rounds of peace talks since March, continued bloodshed has raised questions over how much control rebel leaders have over radical militants.

In one of the deadliest attacks, eight soldiers were killed when a roadside blast ripped through their truck last month.

The BRN in April made a series of public demands including "liberation" from the kingdom of Thailand.

Thai negotiators have raised the idea of creating some form of locally elected administration in the region, but full autonomy for the south remains taboo as the constitution insists the Buddhist-majority kingdom must not be divided.