Putin seeks to calm Snowden tensions with US
World

Putin seeks to calm Snowden tensions with US

President Vladimir Putin on Wednesday sought to ease tensions with the United States over the stay of US intelligence leaker Edward Snowden in Russia, as a lawyer said the fugitive may request Russian citizenship. 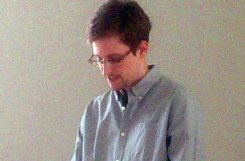 Picture released by Human Rights Watch shows US fugitive leaker Edward Snowden during a meeting with rights activists, at Moscow's Sheremetyevo airport, on July 12, 2013. President Vladimir Putin has said Moscow's relations with Washington outweigh the "squabbles" over a spying scandal revealed by Snowden, who has applied for asylum in Russia.

Putin said Moscow's relations with Washington outweighed the "squabbles" over Snowden, who applied for asylum on Tuesday after spending more than three weeks stranded in the transit zone of a Moscow airport.

But Putin also defended Moscow's right to an "independent" foreign policy after the United States renewed calls for the extradition of Snowden, who is seeking to evade espionage charges for leaking details of a vast US surveillance programme.

"Relations between states are much more important than squabbles surrounding the work of security services," Putin said after overseeing military exercises in the far-flung eastern Siberian region of Chita.

Snowden, a former National Security Agency contractor, has been marooned at Moscow's Sheremetyevo airport since June 23 after revealing that Washington has been seizing huge amounts of Internet and telephone data around the world.

He officially applied for asylum Tuesday, and "does not rule out the possibility of asking for Russian citizenship", said Anatoly Kucherena, a lawyer and pro-Kremlin public figure who helped Snowden file his request for temporary refuge.

Kucherena said that the request takes up to three months to process, but the migration service issues a notice within a week that the application has been accepted for examination, a document that could be used to exit the airport transit zone.

The lawyer -- one of very few people known to have spoken face-to-face with Snowden in the last weeks -- indicated the fugitive was planning to stay in Russia for now.

"He told me: 'I am not going to go anywhere'," said Kucherena, who met Snowden at the airport on Monday and Tuesday.

Kucherena added he would be happy to show Snowden the sights of Moscow, including Red Square, and was ready to represent him free of charge.

The Kremlin had said that Snowden's asylum request is "not a presidential issue" but Putin on Wednesday implied that Moscow would not be pressured by Washington.

"We cannot and will not behave like other countries," he said, in reference to an incident earlier this month when several European countries closed their airspace to Bolivian President Evo Morales's plane amid speculation that Snowden was on board.

Moscow had said that extradition of Snowden is impossible due to lack of a relevant bilateral agreement with Washington, while Russia's parliament speaker said he should be given safe haven because he could face the death penalty at home.

The latest strains in ties between Moscow and Washington come as Putin is set to host US President Barack Obama for a hugely sensitive bilateral summit in Moscow followed by the G20 summit in Saint Petersburg in early September.

The White House voiced strong opposition to Snowden's request for asylum in Russia and has criticised Moscow for providing the 30-year-old with a "propaganda platform".

"We believe there is ample legal justification for the return of Mr Snowden to the United States, where he has been charged with serious felonies," White House spokesman Jay Carney said Tuesday.

He added that the way for Russian and the United States to "move forward" from the Snowden scandal was for Moscow to send him home.

Snowden had indicated previously that he eventually wishes to travel on to Latin America.

Putin reiterated his stance that Snowden would only be welcome to stay in Russia if he did not harm the United States with further leaks, though it was not clear what sort of assurances had been given.

"We have warned Mr Snowden that any activity on his part that has to do with harming Russia-US relations is unacceptable for us," he said.

Since flying in from Hong Kong, Snowden had remained out of sight until Friday, when he met with a group of rights activists and lawyers, including Kucherena, in the transit zone of Sheremetyevo airport.

On Monday, Putin accused Washington of "trapping" the American in Moscow, saying no country wanted to take in Snowden because of US pressure.

Venezuela, Bolivia and Nicaragua have indicated they would be open to offering refuge to Snowden.

BEIJING: China is planning a mega dam in Tibet able to produce triple the electricity generated by the Three Gorges -- the world's largest power station -- stoking fears among environmentalists and in neighbouring India.

Irish PM warns of 'spiral back' as N.Ireland wracked by week of riots