Vietnam to clamp down on social media news postings
World

Vietnam to clamp down on social media news postings

Communist Vietnam is to ban bloggers and social media users from sharing news stories online, under a new decree seen as a further crackdown on online freedom. 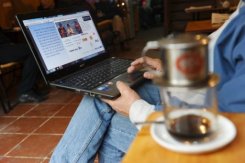 A customer uses his tablet to access the Internet at a coffee shop in downtown Hanoi on August 1, 2013. Communist Vietnam is to ban bloggers and social media users from sharing news stories online, under a new decree seen as a further crackdown on online freedom.

Blogs or social media sites such as Facebook and Twitter -- which have become hugely popular over the last few years in the heavily-censored country -- should only be used "to provide and exchange personal information", according to the decree.

The document, signed by Prime Minister Nguyen Tan Dung and made public late Wednesday, stipulates that internet users should not use social networks to share or exchange information on current events.

Social media users will not be allowed "to quote general information... information from newspapers, press agencies or other state-owned websites", Hoang Vinh Bao, head of the Department of Radio, TV and Electronic Information, said, according to a report on the state-run VNExpress news site.

It is not clear how the law will be implemented or the penalties faced, but internet commentators said it could in theory make it illegal to share links to stories or even discuss articles published online in Vietnam's state-run press.

The decree, which comes into force in September, also bans Internet Service Providers from "providing information that is against Vietnam, undermining national security, social order and national unity... or information distorting, slandering and defaming the prestige of organisations, honour and dignity of individuals".

At the same time, the decree effectively aims to make web giants such as Facebook and Google -- who have publicly criticised previous drafts -- "complicit in curbing online freedoms," said Shawn Crispin of media watchdog the Committee to Protect Journalists.

Experts believe foreign internet companies would refuse to comply with the regulations and the government will struggle to enforce them.

"It seems highly unlikely that these companies would oblige government demands to reveal the IP addresses of users' of their services for merely speaking their minds," Crispin added, referring to the identifying numbers on a every computer.

News aggregating giants such as Yahoo! could in theory also fall under the new rules and be deemed in breach of the decree if they carry critical media reports, although the law makes no direct reference to them.

The country, branded an "enemy of the Internet" by Reporters Without Borders in 2013, bans private media and all newspapers and television channels are state-run.

Many citizens prefer to use social media and blogs to get their information rather than the staid official press.

But the authoritarian government has repeatedly attempted to stifle growing online debate in what rights groups say is an escalating crackdown on freedom of expression.

Online commentators reacted with fury to the decree.

"This decree clearly aims to muzzle the people," Nguyen Quang Vinh wrote on his well-read blog.

So far this year 46 activists have been convicted of anti-state activity and sentenced to often lengthy jail terms under what rights groups say are vaguely defined articles of the penal code.

At least three bloggers were also taken into custody in June alone, all accused of anti-state activity.