Taiwanese lawmakers hurled water and wrestled each other to the floor of the island's parliament Friday in a brawl which broke out during a debate on the fate of a controversial nuclear plant. 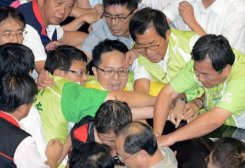 Taiwan legislators scuffle with each other in reaction to a bill due to pass on whether to rebuild the fourth nuclear power plant, at parliament in Taipei, on August 2, 2103. Dozens of lawmakers from opposing camps clashed as they tried to seize the chamber's podium and splashed water from cups and plastic bottles at each other as some shouted "Support for Nuke 4 harms children."

Dozens of lawmakers from opposing camps clashed as they tried to seize the chamber's podium and splashed water from cups and plastic bottles at each other as some shouted "Support for Nuke 4 harms children."

Two scuffling lawmakers from opposing parties fell onto the floor before they were pulled apart by others in footage broadcast live on television.

The parliament was scheduled to vote on whether to hold a referendum to stop the ongoing construction of the island's fourth nuclear plant, also known as "Nuke 4" near Taipei.

But the voting was likely to be postponed to next week after the fighting, said the opposition Democratic Progressive Party (DPP).

The DPP opposes the nuclear plant, citing safety concerns while the ruling Kuomintang party warns that scrapping the facility will lead to insufficient power supply and hurt the economy.

Taiwan's parliament was once notorious for mass brawls between legislators but over the last few years debates had remained relatively peaceful.

However, fighting broke out in June as legislators scuffled and threw coffee during a debate on whether to revise a controversial capital gains tax on share trading.

The latest incident sparked heated criticism from the public on internet forums and social networking websites.

"The parliament is more chaotic than a bazaar and the lawmakers make fools of themselves. It is shameful," said Dick Wang on the comments section of Taipei-based China Times newspaper website.

"Lawmakers are trash and a group of scumbags," read another message left by Simon Li on the United Daily News' Facebook page.

While the lawmakers fought, about 100 environmental activists staged a sit-in outside the parliament, chanting slogans opposing nuclear energy.

Concerns about the island's nuclear facilities have been mounting since 2011, when the Fukushima nuclear plant in Japan was hit by a tsunami sending its cooling systems into meltdown.

Anti-nuclear groups staged several mass street protests in the past few months to call on the government to immediately slam the brakes on the plant and move to completely stop using nuclear energy.

The fourth nuclear plant is about 90 percent complete and due to come online in 2015, according to its operator the state-owned Taiwan Power Company (Taipower).

Construction began in 1999 but the plant has been the subject of intense political wrangling ever since.

Like Japan, Taiwan is regularly hit by earthquakes. In September 1999 a 7.6-magnitude quake killed around 2,400 people in the deadliest natural disaster in the island's recent history.