The Australian government Monday pledged a fresh Aus$200 million (US$177 million) bailout package for the car manufacturing industry as it looks to shore up struggling sectors to help the economy transition away from a mining boom. 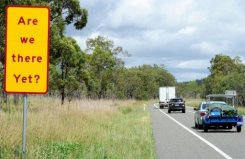 Illustration shows cars passing a road sign on the Bruce Highway. The Australian government Monday pledged a fresh Aus$200 million (US$177 million) bailout package for the car manufacturing industry as it looks to shore up struggling sectors to help the economy transition away from a mining boom.

Industry Minister Kim Carr said the funds would ensure the "automotive manufacturing sector has a strong future and continues to provide high-skill, high-wage jobs for Australians".

The announcement came on the opening day of a five-week election campaign that will culminate in national polls on September 7, with the ruling Labor party facing an uphill battle against the conservative opposition.

"The motor vehicle manufacturing industry in this country provides thousands of jobs, billions of dollars in export income and investment and benefits in research and development," said Carr.

"Our actions will provide crucial ongoing support for an industry that has been under considerable pressure with a high Australian dollar over an extended period and an increasingly competitive global market."

The auto manufacturing sector employs more than 50,000 people in Australia with another 250,000 jobs in associated industries.

But it has struggled, until very recently, with the Australian dollar trading near or above parity with the greenback for almost two years, squeezing exports and compounding rising production costs.

Canberra extended a Aus$3.2 billion bailout to the ailing sector at the height of the global economic downturn and provided additional lifelines to Ford and Holden last year.

But it was not enough to prevent Ford from announcing in May that it will stop making vehicles in the country by 2016.

General Motors subsidiary Holden, which in April announced a plan to slash 500 jobs, and Toyota are the two remaining major players in the industry.

Carr said he was consulting with car makers and associated manufacturers about how best to spend the money.