The IMF said Japan's "three arrows" economic stimulus program is boosting growth Monday but warned that the country must still follow through with fiscal and structural reforms. 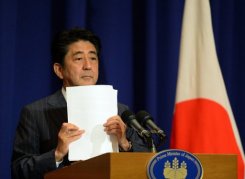 Japan's Prime Minister Shinzo Abe gives a press conference in Manila last week. The IMF on Monday said Japan's "three arrows" economic stimulus program is boosting growth but it pushed the country to follow through with fiscal and structural reforms to seal its gains.

It urged Tokyo to adopt a "credible" medium-term program that includes raising consumption taxes and deregulating farming and the service industry.

In its annual review of Japan's economy, the International Monetary Fund said aggressive stimulus efforts by Prime Minister Shinzo Abe had given a strong boost to growth.

And it forecast that the economy would hold to a two percent pace this year and inflation would pick up gradually.

But the IMF warned that, in addition to monetary and fiscal stimulus efforts, the government must follow through with the so-called "third arrow" economic reforms.

"All three arrows need to be launched for the policies to succeed. Uncertainty about the ambition of fiscal and structural reforms is adding to underlying risks," the Fund said.

"Failure to follow through on fiscal and structural reforms could, however, lead to overreliance on monetary policy with negative consequences for Japan and the global economy."

The IMF reiterated its strong support of "Abenomics", the three-point program to revitalize Japan's economy after more than a decade of stagnation.

It credited the program -- which began this year with a combination of increased, debt-financed government spending and quantitative easing from the Bank of Japan -- with kickstarting the world's third-largest economy to a 4.1 percent rate of growth in the first quarter.

The resulting surge in domestic demand should continue to build, and the economy is expected to achieve a 2.0 percent growth rate for all of 2013.

The IMF said the efforts also appear to be bearing fruit in terms of sparking inflation, which the Bank of Japan wants to push to 2.0 percent to be able to sustain consumption and overall economic growth.

Year-on-year, prices remain lower, but, in a promising sign, gained in the three months to May, the IMF said.

The stimulus efforts have sent the yen lower, enhancing exports, and have boosted share values on Japan's stock markets as well as property values.

Even so, Japan's recovery outlook remains "favorable, but unusually uncertain," the IMF said.

For one, it said, the country has little policy experience to draw on to map out a path for escaping a period of sustained deflation.

Secondly, Tokyo has only broadly sketched out reforms that the IMF says are essential to keeping its turnaround on track.

"Monetary policy cannot do the job alone -- all three of Abe's arrows are required," the IMF said.

"The government recently put forward a broad growth agenda, but critical details remain to be fleshed out in the coming months."

"Concrete steps to raise employment, increase labor market flexibility, deregulate agriculture and the services sector, and enhance the role of the financial sector in supporting growth, would be key."

In addition, it said, the government needs a "clear and convincing plan" to reverse its rising mountain of debt.

"Much can still go wrong," the IMF added, pointing to the volatility in the global economy and the threat of a general slowdown.

"But the bigger risk is domestic, that through complacency or political obstacles we get a partial version of Abenomics, missing one or more of its key elements and failing to convince that 'this time is different'."