The Swiss city of Zurich on Thursday unveiled a sex drive-in which local authorities say will enable them to keep closer tabs on prostitution, a year after voters backed the plan. 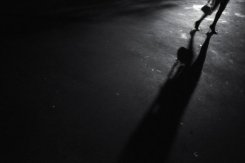 A sex worker at Tlalpan Avenue in Mexico City, on January 20, 2010. The Swiss city of Zurich on Thursday unveiled a sex drive-in which local authorities say will enable them to keep closer tabs on prostitution, a year after voters backed the plan.

Due to be opened officially in a ceremony on Aug 26, the nine so-called "sex boxes" are located in a former industrial zone in the west of the metropolis, Zurich city hall said in a statement.

The site will be open daily from 7:00 pm to 5:00 am, and only to drivers, who must be alone in their vehicle if they want to pass the gate.

Echoing a fast-food drive-in, they will have to follow a marked route along which up to 40 prostitutes will be stationed. Once they have negotiated a rate, they will drive to one of the nine car-wash style boxes to have sex.

The boxes will be equipped with alarms, allowing the prostitutes to make rapid contact with police if they are in danger.

With over 1.8 million people, the Zurich conurbation makes up almost a quarter of Switzerland's population, and the city itself has long been home to a red-light district.

But with local residents fed up of prostitutes and clients plying the streets, notably along the riverside Sihlquai, the authorities decided to try to shift the sex trade from the city centre.

In addition, officials have said that they want to ensure the safety of prostitutes, stem trafficking by crime networks and reduce the role of the underground sex trade.

The sex-box plan was approved by Zurich's voters in March 2012 -- referendums from the local to the national level are the bedrock of Switzerland's system of direct democracy.

Work on the new site cost 2.1 million Swiss francs (US$2.2 million), below the voter-approved budget, while running costs are expected to be around 700,000 Swiss francs a year.

Zurich has spared no effort to encourage the prostitutes and their clients to leave the city centre and use the new site, making it as pleasant as possible, with grassy areas and decorative lights.

It will be marked clearly with signposts sporting a red umbrella, a well-known symbol for the sex trade notably in eastern Europe.

To avoid putting off clients, city authorities said they had no plans to install video surveillance or deploy police at the site permanently.

Social workers and security guards will be on hand, however.

The sex-box plan is just one of a series of measures in Zurich to deal with prostitution, which is legal in Switzerland.

Since January, prostitutes have been required to obtain a permit to ply their trade. To receive one, they must have a Swiss work permit and health insurance.

In addition, they must pay a tax of five Swiss francs per night of work.

Clients, meanwhile, can only seek sex in three designated areas of Zurich -- the new sex-box site, a zone near a highway, and, for those on foot, in part of the old town district.