There's nothing trashy about Gregory Kloehn's Brooklyn pied-a-terre: a live-in dumpster that sleeps two with ease, hosts impromptu barbecue parties and sports its own sundeck. 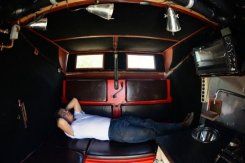 Greg Kloehn lying inside the home he made from a dumpster, pictured August 15, 2013 in New York. He bought the dumpster for $1,000 and transformed into a mini home, complete with sink, propane stove and microwave oven.

It's the California artist's tin-can contribution to the tiny-house movement that's prompting many Americans to ask if bigger really is better when it comes to having a roof over your head.

"On the street, when it's all closed up, if you don't know about it, you think it's a garbage can," said Kloehn, 42, as he invited AFP to step inside for a house tour.

"They don't know I'm in here sleeping... Even with the barbecue going outside, chicken wings grilling, people just walk by. They don't see it as a home."

Kloehn had already turned 20-foot shipping containers into housing units when he thought up the idea of doing likewise with the steel garbage receptacle known to Britons as a skip.

"What I did is that I bought a brand new dumpster and just started going to town," he said.

"I was going to make it a little rougher at first, but then I started and I thought, 'Let's put in some granite counter tops. Let's put in some hardwood floors. Let's really make it luxurious and liveable -- really take everything a regular home has and throw it into this small a space."

You enter Kloehn's dark-green crash pad -- his home back in Oakland is rather more conventional -- through a Dutch door with an affixed minibar that is well-stocked with whiskey and vodka.

To the right is the galley-style kitchen with smooth granite countertop, sink, single-burner gas stove, concealed icebox and a hood fashioned out of an old wok.

Running around the edge is a cushioned sofa, upholstered in black vinyl, with backs and seats that lift off to reveal storage space and a marine toilet connectable to a city sewage system.

There's definitely no room to swing a cat, but twist a crank and up goes the ceiling to reveal a pair of eyebrow windows to provide natural light and some welcome headroom.

Welded onto the exterior is a shower and the gas barbecue. Electricity comes from whatever socket happens to be nearby -- what Kloehn calls "living off somebody else's grid."

A descendant of Civil War president Abraham Lincoln who, according to legend, grew up in a log cabin, Kloehn paid about $1,000 for the dumpster, known in the trash business as a six-yard humpback.

He spent another couple of thousand on fittings and insulation -- about as much as one month's rent for a cramped Manhattan studio.

"It's actually kind of neat, considering what he built it out of," said Ryan Mitchell, who blogs about tiny-house design and construction at www.thetinylife.com.

In a nation where the average home is 2,600 square feet (241 square meters), tiny houses -- typically 186 square feet, but going up to 400 square feet -- are fetching more attention, not least from aging baby boomers looking to downsize in their retirement years.

"There are more builders. There are more people seeking to live in tiny houses," Mitchell told AFP by telephone from North Carolina, where he is completing his own diminutive dwelling.

There would be even more tiny homes, he said, if if local zoning regulations and housing codes were not so restrictive.

In a back alley in Washington, a four-unit tiny-house community has taken root at Boneyard Studios (www.boneyardstudios.com), showcasing the possibilities of small-is-beautiful housing in the heart of the nation's capital.

"It's not for everyone by any means," said Jay Austin, whose 140-square foot home at Boneyard Studios, the Matchbox, is totally off-grid, self-sustaining and carbon-neutral.

In New York, the city's museum is showing off a 325 square foot micro-apartment boasting all the features of a unit twice its size -- and it's invited a lucky few to try it out for size by spending the night in it.

"I actually could see myself living here," museum intern Taylor Jones told the New York Times after a sleepover this week, although she worried how cluttered such a compact space could become.

Not content with making a dumpster just for himself, Kloehn has used found materials -- a fridge door here, some castaway lumber there, topped with a fiberglass hood from a pickup truck -- to create a "debris home" on wheels for the homeless.

He's also tinkered with barbecue and salad bars on bicycle frames, documenting them on his www.gregorykloehn.com blog.

Back in Brooklyn, where he's in the early stages of turning four 20-foot shipping containers into an "interactive sculpture" literally a stone's throw away, Kloehn climbs atop his dumpster's sundeck and casts an eye over his neighborhood.

Over here, there's the cavernous artists' loft whose owner kindly lets him keep his dumpster in the back yard. In front, the abandoned yet majestic New York Dock Company warehouse. And over there, the gleaming white Queen Mary II that just sailed into town.

"There's more overhead, more things to go wrong, more yard to take care of." And, he shrugged, "your're going to fill it up eventually with junk."