Two Iranian men were sentenced to between 15 years and life Thursday for their parts in a botched bomb plot last year in Bangkok that ended with one of them having his legs blown off. 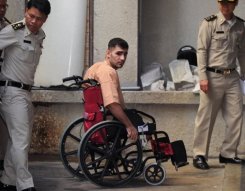 Saeid Moradi, in wheelchair, and Mohammad Khazaei, are shown at court in Bangkok on August 22, 2013. The two Iranian men were sentenced to between 15 years and life for their parts in a botched bomb plot last year in Bangkok that ended with Moradi having his legs blown off.

The pair, who had denied the charges, were among five Iranians suspected of involvement in blasts that Israel has linked to a 2012 spate of attacks on its diplomats across the world.

Saeid Moradi, 29, who lost his limbs as he hurled an explosive device at police in the Thai capital, was found guilty on charges including attempted murder and handed a life term by the Bangkok Southern Criminal court.

"Because attempted murder displays serious intent the court sentenced him to life in prison," he added.

A second defendant, Mohammad Khazaei, 43, was given a 15-year jail term for possession of explosives.

The blasts on February 14 last year occurred a day after bombs attacks on Israeli diplomats in India and Georgia.

A huge explosion tore the roof off a house in suburban Bangkok when bombs detonated inside, apparently accidentally.

Moradi tried to "escape by carrying two bombs with him... throwing the first to stop people following... throwing the second when police tried to stop and arrest him", the judge said as he sentenced the pair Thursday, adding that an expert witness said five C-4 explosives had been hidden in radios in the house.

Prosecutors said Moradi hurled one of the bombs at a taxi, then threw the second at two police officers as they approached him on the street, but it instead detonated near him.

The court heard that Khazaei ran out of the house after the first explosion and headed to the airport where police arrested him at the boarding gate.

A third man is thought to have fled to Malaysia, where he is in custody and fighting extradition to Thailand. Two other suspects are believed to have returned to Iran.

Israel has accused Tehran of waging a terror campaign over the Bangkok bomb plot.

"This sentence proves once again that Iran is engaged and in proliferation of terror all around the world," Israeli ambassador Simon Roded told reporters after attending the court hearing.

He thanked the Thai government for its response to the blasts.

"I hope that other countries will join Thailand in fighting this terror and bringing terrorists to justice," said the diplomat, who was flanked by bodyguards as he watched proceedings.

Moradi, who appeared in court in a wheelchair, had argued in his defence that he accidentally found bombs in the Bangkok property and was trying to dispose of them safely when they detonated.

The court also found him guilty of possession of explosives.

The pair, who arrived at court in prison clothes, were additionally handed financial penalties over the incident, including two million baht ($62,000) compensation payment for the damage to the Bangkok house.

They appeared subdued as they heard the sentencing.

Defence lawyer Kittipong Kiattanapoom said his clients had not yet indicated whether they would appeal.

"They will initially serve their sentences in Thailand, but Thailand and Iran have a prisoner exchange treaty so they could seek to serve their remaining terms in their homeland after a period of time," he said.

Last year Israel said it was facing a wave of Iran-sponsored terror around the world.

On February 13, 2012, an assailant on a motorbike attached a magnetic bomb to an Israeli embassy car near the Indian prime minister's residence in New Delhi.

A female Israeli diplomat, who was also the wife of the defence attache at the embassy, was badly wounded in the explosion. Her driver and two passengers were also hurt.

On the same day police defused an explosive fixed to another embassy vehicle in the Georgian capital Tbilisi.