It's survived two world wars, communist spies and a Quentin Tarantino movie production and at the ripe age of 100, Berlin's most legendary dance hall is also among its most unlikely success stories. 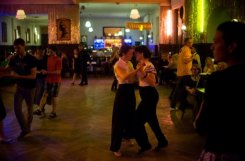 People dance during a Swing night at Claerchens Ballhaus in Berlin, on July 10, 2013. The dance hall will celebrate its 100th anniversary this year.

As Claerchens Ballhaus (Claerchen's Ballroom) prepares to fete its centenary next month, the fabled venue still sees hordes of party-goers young and old queue up in front of its crumbling facade.

White-haired ladies in tiaras and dancing shoes wait to gain entry with hipsters in skinny jeans in a courtyard under a canopy of mature trees, strings of lights and a giant mirrored disco ball.

"Under the kaisers, the chancellors and the chiefs of the (communist) state council, in times of upheaval and social experiments, divided and united again -- everybody on one and the same dance floor of history -- every political system left its traces," Marion Kiesow writes in her new book timed for the anniversary, "Berlin Dances at Claerchen's Ballroom".

Kiesow argues that in a city that has seen a century of turmoil and reinvention, Claerchen's is a remarkable constant.

Combing through the building from the basement to the attic, she uncovered decades of relics including love letters, sepia photos and even ripped military maps left behind by Nazi officers during World War II to help her tell Claerchen's unique story.

In the heyday of German ballrooms around the turn of the last century, Berlin alone had about 900 venues like Claerchen's, fixtures of every neighbourhood.

Many were destroyed during World War II air raids and those remaining fell out of favour in the 1970s and 1980s as revellers flocked to discos and later the techno clubs that cropped up in the city's abandoned industrial spaces.

Only three of the imperial-era ballrooms in the city centre remain and Claerchen's is seen as the most authentic, with nightly dancing.

The venue opened on September 13, 1913, named Buehler's Ballroom after its first owner, but later became known as Claerchen's after the nickname of his widow Clara.

Clara Buehler was a tough Prussian farmer's daughter who became one of the first women in Berlin to earn a driving licence.

When business suffered after World War I, she rented the building out for then-banned sabre duels popular among students and staged widows' balls.

After she herself lost her husband, Claerchen remarried, took the name Habermann and kept the venue afloat.

Under the Third Reich, "un-German" dance styles such as tango were outlawed, but the parties went on, often drawing the Nazi brass.

Life behind the Berlin Wall turned the place into something of a dive, where cheap beer drew rowdy soldiers, factory workers and travelling salesmen, some coming from West Berlin for the bargain and the dance hall's reputation for "loose women".

The snappily dressed cloakroom attendant since the 1960s, Guenter Schmidtke -- whose mother and late wife also worked at Claerchen's -- said there were fist fights several times a week between revellers.

And as it attracted West Germans, it also became a den of Stasi spies, and more-or-less discreet prostitutes.

When her stepdaughter Elfriede Wolff took over in 1967, the severe-looking Claerchen still sat at a reserved table at the end of the buffet to keep an eagle eye on her livelihood.

Wolff held the reins until the year the Wall fell in 1989.

Reunification brought soaring rents and an influx of boutiques and galleries along Auguststrasse, the street where Claerchen's is situated.

Theatre impresarios David Regehr and Christian Schulz took over the venue in 2005 and changed as little as possible, apart from reopening a "Sleeping Beauty" upstairs ballroom for the first time since the war.

They say it would be "crazy" to renovate the pockmarked exterior, which wears its war damage and the patina of the last century like a badge of honour.

Claerchen's has parlayed that flair into use as a film set for "Valkyrie" with Tom Cruise and Quentin Tarantino's "Inglourious Basterds" with Brad Pitt.

"It's a little like 'Harry Potter' -- you think there are ghosts who are having some fun and dancing along with us," she said.

"The thing I love most about this place is its spirit -- it's a spirit you find not only in the building itself but also in the people who have worked here for so long. It's part of the Berlin tradition and about survival."

Ulrich Linser, 58, from East Frisia in northern Germany, expertly twirls his wife Beate, 60, around Claerchen's dance floor every time they are in Berlin visiting their son.

"It's very international here, you can speak Spanish or English and it's such a broad mix of ages too -- there's a 15-year-old here and a 90-year-old there," Ulrich said.

"You feel like you're part of a long tradition and it's wonderful."