Iraq's oil ministry, struggling with sputtering output, has blamed Anglo-Dutch energy giant Shell over $4.6 billion in lost revenue due to production delays, in a letter seen by AFP Monday. 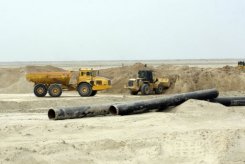 In this file photo, metal pipes are seen as the land is cleared from ordnance and mines laid down during the Iraq-Iran war 1980-1988, in the massive Majnoon oil field, some 40 km from the eastern border with Iran, on February 7, 2012. A consortium of Shell and Malaysia's Petronas signed a contract with Baghdad in January 2010 to develop Majnoon, a giant oil field in southern Iraq.

The document, dated July 21, 2013, sharply criticises the foreign energy firm for shortfalls in oil extraction at the giant Majnoon field in south Iraq, and comes as oil exports have fallen to their lowest level in 16 months even as Baghdad has looked to cement its role as a key global energy producer.

It indicates growing frustration within the government over oil exports, which account for the lion's share of state revenues -- a dispute with the northern Kurdish region has suspended expected sales from there, and sales via a pipeline through to Turkey have markedly dipped compared to previous years.

Two separate sources with knowledge of the letter's contents confirmed its authenticity to AFP, but declined to be identified discussing the matter.

The letter was addressed to Shell's Iraq Vice President Hans Nijkamp and bore the letterhead of the oil ministry's Petroleum Contracts and Licensing Directorate (PCLD).

According to parts of the letter seen by AFP, it stated that "production from Majnoon Oilfield ... has been stopped for an unacceptably long time" and added that "aggregated losses of production" at Majnoon amounted to 44 million barrels of oil.

"As a result, Iraq has suffered heavy direct losses, which we have determined conservatively at more than (4.6) billion US dollars," the letter, which was written in English, read.

"Of course, Iraq continues to suffer losses each day as a result of Shell's failure to perform its contractual obligations."

It said that "the field has been shut down and the production stopped since 1st July 2012 based upon Shell's request to perform the rehabilitation of the existing surface facilities."

"This rehabilitation was to have been completed in four to six months with production resuming no later than 1st January 2013."

It continued: "So far, Shell has neither resumed the previous production ... nor achieved the First Commercial Production."

The ministry also alleged that the company has "not taken any serious measures to handle the associated gas produced from the field."

"The flaring of this gas has had a negative impact on Iraq both economically (i.e. revenue losses) and on the environment as well as it's in violation with the Iraqi laws."

A consortium of Shell and Malaysia's Petronas signed a contract with Baghdad in January 2010 to develop Majnoon, a giant oil field in southern Iraq.

Shell holds a 45-percent stake in the project, while Petronas has 30 percent, with the remainder held by a state-owned Iraqi firm.

The contract for Majnoon, which has proven reserves of 12.58 billion barrels of oil, was awarded to the consortium in a public auction in December 2009.

It was originally set to produce 1.8 million barrels of oil per day within six years of the contract having been signed, but the government has in recent months sought to reduce peak production targets at several fields, including Majnoon, in order to prolong high levels of output.

Spokespeople for Shell and Iraq's oil ministry declined to comment on the letter. Abdul Mehdi al-Amidi, head of the PCLD, also did not respond to requests for comment.

In a statement e-mailed to AFP, however, Shell spokesman Diego Perez said: "We can confirm than when we started opening the brownfield facilities for inspections and repair towards the end of last year, our technical assessment indicated the need for major additional work."

"The safety of our people and assets remain ... our top priority in Iraq, so we have been working in getting the facilities back to an acceptable condition and ensure a safe and reliable operation."

"Drilling operations to restart new production in Majnoon have successfully concluded and we expect to open the wells in the near future, followed by a short period to test and fill in the system".

Perez said the company was targeting production of 175,000 bpd "between now and the end of the year."