More than a dozen bomb blasts ripped through Shiite districts in and around Baghdad on Wednesday, the bloodiest in a wave of attacks that killed 68 people across Iraq. 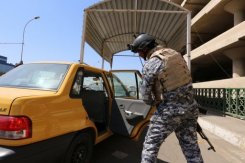 Iraqi civilians check the site of an explosion in Baghdad on August 28, 2013. More than a dozen bomb blasts ripped through Shiite districts in and around Baghdad on Wednesday, the bloodiest in a wave of attacks that killed 68 people across Iraq.

The worst of the bloodshed struck the capital and surrounding areas in a spate of apparently coordinated car bombings and suicide attacks during morning rush-hour.

Angry residents of one neighbourhood chased down a suspected attacker and killed him before setting his corpse ablaze.

The unrest came despite widely publicised security operations targeting militants in Baghdad and to the north and west, though the government has faced charges of not dealing with the root causes of Iraq's worst violence since 2008.

A spike in violence that has seen more than 3,700 people killed since the beginning of the year, has sparked concerns that Iraq is teetering on the edge of a return to the brutal all-out sectarian war of 2006-2007.

Overall, violence in Baghdad and towns just south of the capital left at least 64 dead on Wednesday, while four others were killed in the northern cities of Kirkuk and Mosul.

More than 200 people were wounded nationwide.

"We are poor people, and all of our things have been burned, and our home has fallen to the ground," said Marwa, an 18-year-old resident of Shaab, a mainly Shiite district in north Baghdad where four people were killed, and cars and nearby buildings damaged by two car bombs.

"The politicians are fighting over positions and not looking after us," she said, sobbing.

The deadliest attack, though, struck in the Jisr al-Diyala neighbourhood of southeast Baghdad, with at least nine people killed and 27 wounded in twin bombings.

After the blast, local residents ran down a man suspected of planting the second car bomb, stabbed him to death, set his corpse on fire and hung it from a lamppost, a police officer said.

Further blasts went off in other major Shiite neighbourhoods including Kadhimiyah and Sadr City, while five members of a Shiite family were shot dead in their home south of the capital.

Officials gave varying tolls, which is common in the chaotic aftermath of bombings in the capital.

The interior ministry, whose public casualty counts are typically markedly lower than those reported by hospital and security officials, said 20 people had died and more than 200 were wounded across Baghdad.

Iraqi lawmakers and the UN mission to Baghdad condemned the violence.

No group immediately claimed responsibility, but Sunni militants linked to Al-Qaeda frequently carry out such coordinated attacks targeting Shiites, whom they regard as apostates.

Wednesday's attacks were the latest wave of coordinated bombings to hit Baghdad this month.

On August 6, at least eight car bombs and several roadside blasts killed 31 people, while 47 people died in a spate of explosions and gun attacks in the capital on August 10.

Iraq has seen a marked rise in the level of violence this year, coinciding with demonstrations by the Sunni Arab minority against alleged ill treatment at the hands of the Shiite-led government and security forces.

More than 600 people have already been killed so far this month, according to an AFP tally.

Though diplomats and analysts have urged broad-reaching moves to tackle Sunni frustrations, which they say give militant groups room to recruit and carry out attacks, Prime Minister Nuri al-Maliki has vowed to press on with an anti-militant campaign.

In addition to persistent security problems, the government has also failed to provide adequate basic services such as electricity and clean water, and corruption is widespread.

Political squabbling has likewise paralysed the government, which has passed almost no major legislation in years.