Catalans massed in a vast human chain stretching hundreds of kilometres along the Mediterranean coast on Wednesday, demanding independence from Spain in the face of fierce opposition from the national government. 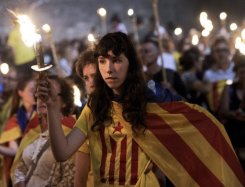 Activists calling for the independance of Catalonia, currently a region of Spain, take part in a 'human chain' during a protest on September 11, 2013, in Perthus, southern France.

Hundreds of thousands of people in yellow t-shirts joined in, according to organisers, yelling "Independence!"

They linked hands and rose them in the air along highways and through towns in the northeastern region, amid countless pro-independence flags bearing the red and yellow stripes of Catalonia overlaid with a white star on a blue background.

Proud of their Catalan language and culture, but suffering now in a recession, many of the 7.5 million people in debt-laden Catalonia say they feel short-changed by the central government which redistributes their taxes.

"We need to put an end to the cultural and economic suffocation we are suffering," said Carme Forcadell, president of the Catalan National Assembly, the grassroots group organising the human chain.

"We have come out in our hundreds of thousands into the street to show in a democratic and inclusive way that we are capable of achieving any aim we set ourselves," she told the crowd in central Barcelona.

She said earlier that the rally aimed to draw 400,000 people and to stretch for 400 kilometres (250 miles) along Catalonia's Mediterranean coast.

The chain passed by landmarks such as the Sagrada Familia basilica in Barcelona and the city's Camp Nou football stadium.

The timing was a reference to the year 1714, the date of the military defeat which for many Catalan nationalists marked the beginning of oppression by the Spanish state.

Prime Minister Mariano Rajoy's conservative government refuses to countenance a break-up of Spain, and has vowed to block a referendum on self-rule that Catalonia's regional president Artur Mas has promised for 2014.

A referendum would be a "unilateral declaration of independence that would have serious consequences for Spain and also for Catalonia" which would have to "bid farewell to the European Union", Spanish Foreign Minister Jose Manuel Garcia-Margallo warned.

"With the strength of our unity, they can't deny us a referendum and independence," said Fina Agullo, 65, as she took part in the human chain in front of the Sagrada Familia basilica.

In Barcelona's Plaza de Espana square, giant yellow letters placed on the grass spelt out in English: "We want independence".

Mas, who avoids using the word "independence" in his demands, said Catalans "must be consulted next year on their political future" and vowed to use all "legal and democratic means" to that end.

He confirmed on Wednesday that he had held covert talks on the issue with Rajoy on August 29.

"We are in dialogue with the government but I doubt very much that this dialogue will bear fruit. I do not see any political will," he told foreign reporters in a briefing.

Catalonia has long been considered an engine of Spain's economy, but it has suffered in the economic crisis of recent years.

Its unemployment rate has climbed close to 24 percent, its debts exceed 50 billion euros ($67 billion) and it had to ask Madrid for 9.07 billion euros from a fund to help debt-laden regions.

"That would have solved much of the problem a year ago, but now, a fiscal pact will not solve the problem," Mas said Wednesday.

"Any solution for Catalonia must come from the ballot box, from a consultation, from a referendum."

He said that if Madrid blocked a referendum in 2014, the next regional elections due in 2016 would serve as a plebiscite on self-determination.

"The feeling is very strong now and it is not good to draw the process out. We are a democracy, we have to push ahead."