Algeria's home-grown manga a hit with the young
World

Algeria's home-grown manga a hit with the young

It is a massively popular book form that originated in Japan where it became a cultural phenomenon. Now manga comics are flourishing in Algeria as well. 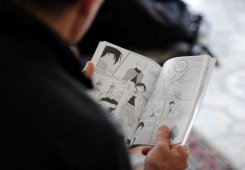 A man reads "The Revolution" on September 18, 2013 in Algiers, a manga comic book created by Algerian artist, Fella Matougui, for the 50th anniversary of Algeria's independence.

"The Algerian manga is our trademark," said Salim Brahimi proudly. "It's what we call the DZ manga."

Brahimi is the founder of Z-Link, Algeria's first publisher of manga comics. And Z-Link's manga are 100 percent Algerian, from the drawings to the text.

And the comics are flying off the shelves.

"We are printing 3,000 copies per title," said Kamal Bahloul, Z-Link's representative at a book festival in the eastern city of Tizi Ouzou.

Since its launch in 2007, Z-Link has been increasing its catalogue -- and its staff.

"When we started this adventure there were just two of us," said Bahloul. "Now we have nearly 30 employees. We are growing five percent on average every year."

In 2008, a year after Brahimi co-founded Z-Link, he launched a key weapon in its marketing armoury: Laabstore magazine, a monthly review of Algeria's burgeoning manga, cinema and video games scene.

Laabstore runs extracts from the work of up-and-coming manga writers -- and of course also serves as a successful shop window for Z-Link's own titles, with its print run having risen from 2,000 to 10,000 copies in five years.

Japan's manga, a sometimes lurid style of comic strip, cover a wide range of themes and are massively popular both at home and abroad.

The Algerian version respects the basic ingredients of sharp humour, suspense and a hyperactive artistic style, but the scripts also add the crucial local flavour.

DZ's catalogue includes a variety of genres -- and claims plenty of young talent, both male and female.

"The Revolution", published in 2012 to mark the 50th anniversary of Algeria's independence from France, is one of a string of titles from 18-year-old Fella Matougui.

And one of the first major successes of the local manga scene was "Samy Kun" by Yacine Haddad, about a teenager who gets mixed up in the problems of the Algerian Sahara.

But as well as the different subject matter explored by the writers, the artists have sought to break away from the purely Japanese style by bringing distinctive local touches to their work.

Despite its success, however, Algeria's DZ manga is often more of a passion to pursue than a way of earning a living -- even for the award-winning Oudjiane.

"I work on manga on the side. I can only devote my free time to it, at the weekends and at night," he said.

Likewise for manga author Amir Cheriti, whose day job is as a graphic artist in an advertising agency.

"For us, it is still for pleasure," he said.

Algeria's DZ manga has had its own special billing at prestigious industry events, including two international book fairs in the French cities of Angouleme and Montpellier.

But surely the greatest recognition so far has come from the manga Mecca itself.

The influence of the Algerian brand is also attracting attention in the United States, where it is the subject of a doctoral thesis at Philadelphia University.

And there is growing interest from companies seeking to harness its marketing potential.

"Firms like Sonelgaz and Panasonic have called us about advertising illustrations," said Bahloul.

At the Tizi Ouzou book fair, Z-Link is busily raising manga's "Made in Algeria" profile, with Oudjiane displaying his skills to a group of inspired young festival-goers at one workshop.

"In 20 or 30 years, young Algerians will all have mangas and comics on their bookshelves," said Bahloul, predicting the continuation of trend that few would bet against right now.

Change, but no change

A Pheu Thai general assembly will decide on a new executive line-up, with Sompong Amorwiwat tipped to be returned as leader, but the party will remain in the opposition camp.