The UN's climate panel said it was more certain than ever that humans were the cause of global warming and predicted temperatures would rise another 0.3 to 4.8 degrees Celsius (0.5-8.6 degrees Fahrenheit) this century. 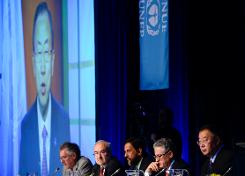 Heatwaves, floods, droughts and rising seas are among the threats that will intensify through warming, the Intergovernmental Panel on Climate Change (IPCC) said in a report released in Stockholm.

In a government-approved summary, the Nobel-winning group said it was "extremely likely" -- a term meaning it was 95-percent convinced -- that humans caused most of the warming observed over the past 60 years.

UN climate chief Christiana Figueres said the report was "an alarm-clock moment for the world".

"To steer humanity out of the high danger zone, governments must step up immediate climate action and craft an agreement in 2015" against greenhouse gases, she said.

"Those who deny the science or choose excuses over action are playing with fire," he said.

The volume is the first of a trilogy summarising the status of global warming and its impacts.

The IPCC has delivered four previous assessments in its 25-year history.

Each edition has sounded an ever-louder drumbeat to warn that temperatures are rising and the risk to the climate system is accentuating.

The projections for this century are based on computer models of trends in heat-trapping greenhouse gas emissions, especially from coal, oil and gas which provide the backbone of energy supply today.

"Global surface temperature change for the 21st century is projected to be likely to exceed 1.5 C relative to 1850-1900 in all but the lowest scenario considered," said Thomas Stocker, co-chairman of the working group that authored the report.

Heatwaves this century "very likely" will be more frequently and longer, he said, with added risk of floods and droughts in a warmer world.

Climate sceptics have pointed to a slowdown in warming over the last 10 to 15 years as proof that scientists' models are flawed -- or that global warming is a green scare.

The IPCC acknowledged the slowdown but noted the decade ending 2010 was still the warmest on record and was marked by extreme weather events.

It also cautioned against arbitrarily selecting dates to justify an argument.

Thirty years or more are needed to see whether any slowdown was for real or just a quirk, said Stocker.

"Our activities today will have a profound effect on society, not just for us but for many generations to come," he told a press conference.

In a video statement, UN Secretary General Ban Ki-moon said the report was "essential" for governments thrashing out an ambitious global deal by 2015 on curbing greenhouse gas emissions.

Ban will host a summit in September 2014 to boost political commitment to reach the 2 C target, a level that some experts say will avoid the worst climate fallout.

Political interest in climate change dwindled after a near-disastrous UN summit in Copenhagen in 2009, and willingness for concessions has fallen back in developed countries still reeling from the 2008 financial crisis.

To safely reach the 2 C target, carbon emissions would have to peak by 2020 and then fall dramatically over the next half century, according to previous research.

The report said mankind has already used 53 percent of the emissions allocation that would make 2 C possible -- a trillion tonnes of carbon.

The work released Friday comprises a 2,000-page report authored by 257 scientists, plus a 36-page Summary for Policymakers.

Two more volumes of the Fifth Assessment Report will be released next year.