US government on brink of shutdown
World

US government on brink of shutdown

WASHINGTON - Setting up a high-stakes political showdown, the US House was to vote late Saturday (Sunday morning, Thailand time) on a Republican plan that keeps government open through mid-December while delaying implementation of President Barack Obama's health care law. 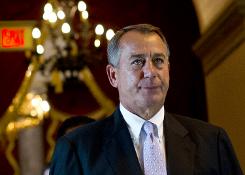 US House Speaker John Boehner arrives at the House of Representatives chamber at the US Capitol on September 28, 2013 in Washington.

The move prompted a sharp rebuke from the White House, which warned it was a step toward shutting down the government once the fiscal year ends Monday night, and vowed to veto any such bill.

House Speaker John Boehner convened a rare Saturday session as Congress struggles to break a funding impasse that, if unresolved, would require hundreds of thousands of federal workers to stay home.

In addition, more than a million US military personnel would remain on duty - but with no pay.

Under pressure from his party's far-right conservative wing, Boehner doubled down on his caucus's bid to stop Obama's signature domestic achievement, the health care law known as Obamacare, vowing to send a bill back to the Senate but with little time for legislative action to avoid a shutdown.

If Republicans vote in unison as expected, the House will approve a measure "that will keep the government open and stop as much of the president's health care law as possible," Boehner said in a statement.

"We will do our job and send this bill over, and then it's up to the Senate to pass it and stop a government shutdown."

The House had earlier passed a temporary budget bill known as a continuing resolution that included a provision defunding so-called Obamacare altogether.

The Democratic-led Senate stripped that part out and sent a clean stopgap measure back to the House.

But instead of passing it, the House plans to amend the bill with a one-year delay of the health care law and repeal of an unpopular medical device tax.

While conservative lawmakers hailed the move, the White House slammed it.

"Today, Republicans in the House of Representatives moved to shut down the government," spokesman Jay Carney said in a statement just hours before the vote.

"Any member of the Republican Party who votes for this bill is voting for a shutdown. "

In a separate statement, the White House Office of Management and Budget warned that "if the President was presented with H.J. Res 59, as amended by these amendments, he would veto the bill."

"To be absolutely clear, the Senate will reject both the one-year delay of the Affordable Care Act and the repeal of the medical device tax," Reid said.

"The American people will not be extorted by Tea Party anarchists."

Driving the point home, a Senate Democratic aide said it was highly unlikely the chamber would be in session before Monday.

"We are not playing games," he told AFP.

House Democrats, largely powerless to prevent passage of Republican-backed legislation in the lower chamber, expressed worry that the US government would suffer the same fate as a Washington deadlock in late 1995 that resulted in a 21-day work stop.

"I think we are on our way" to a shutdown, said Congressman John Lewis, a 27-year House veteran. "We're closer now than ever before."

And they charged that Democrats would be on the hook for any government closure, not Republicans.

Boehner and fellow House leaders had struggled to stake out a position palatable to their divided members.

A chorus of criticism -- including from Obama as well as some centrist Republicans in the Senate -- accused Tea Party-backed lawmakers of unwisely threatening a shutdown if they did not get their way.

"How dare you presume a failure?" Congressman Darrell Issa barked at a reporter who asked what would happen when the Senate rejects the House measure.

"We continue to anticipate that there's an opportunity for sensible compromise."

Congress has less than 60 hours to strike a deal that keeps government open, but the ping-ponging of legislation is making that unlikely.

As if anticipating a possible shutdown, Boehner said the House would vote on a separate measure "that ensures our troops get paid, no matter what."